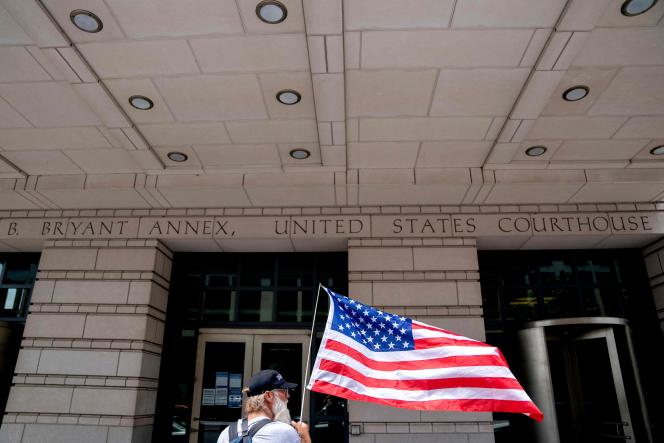 Donald Trump’s eminence grise, populist Steve Bannon is to be tried for “obstructing the investigative powers of Congress” after knowingly ignoring summonses from the House Committee seeking to establish accountability for the assault on the Capitol on 6 January 2021. American justice begins, Monday, July 18, the selection of jurors responsible for examining the refusal of this close friend of Donald Trump to cooperate with the parliamentary investigation into the attack on the headquarters of Congress.

A discreet but very influential adviser, he played a crucial role in the election of the Republican billionaire in 2016, giving a resolutely populist turn to his campaign, before being pushed out the following year. The now 68-year-old man, a vocal critic of the political establishment, is closely associated with the far-right ideas he pushed, thanks to Donald Trump, to the pinnacle of federal power.

The two men, who remained close, had exchanged in the days preceding the attack on the Capitol, according to the House of Representatives committee responsible for shedding light on the role of the former president in this coup.

The exchanges between Trump and Bannon in question

To learn the nature of their discussions, the commission subpoenaed Steve Bannon to testify and produce documents because he “had specific knowledge of the events predicted for January 6 before they occurred.” As an example, she cites comments he made on his hugely popular conspiratorial podcast the day before the riot.

“It’s not going to be the way you think it’s going to be, okay? It’s going to be quite extraordinarily different. All I can say is hang on tight,” he said on the show. “Hell is going to break loose tomorrow. (…) So many people said, “Man, if I was in a revolution, I would be in Washington.” Well, this is your time in history,” he added.

Mr. Bannon had mostly spoken on the phone with Mr. Trump, a sign that he had kept the ear of the Republican president long after the latter had removed him from the West Wing. If other proof of the links between the two men were needed, we could cite the decision of the tenant of the White House, just before his departure, to pardon his former collaborator, in another case. Mr. Bannon was accused of embezzling funds allegedly intended for the construction of a wall on the Mexican border.

Until then, the former White House strategist had refused to testify to the commission, brandishing the argument of executive privilege, invoked by Donald Trump, to justify his choice. This privilege, a simple principle not defined by law, protects the confidentiality of exchanges between the president and his relatives. A refusal that earned him to be charged in November with “obstructing the investigative powers of Congress”.

On July 11, as his trial approached, the sixty-something turned around by agreeing to cooperate with parliamentarians. The prosecutors then denounced “a last minute reversal in order to avoid” a conviction, while the judge in charge of the case wished to maintain the trial.

His lawyers, for their part, asked, in vain, for a postponement of the trial for fear that the jurors would be influenced by the broadcast of the hearings of the commission of inquiry, the next of which is scheduled for Thursday evening, at prime time. listen. After more than a year of investigations, it will detail the day of January 6, 2021 as experienced by Donald Trump, “what has been done and what has not been done”, explained the elected official on Sunday. Democrat Zoe Lofgren on ABC.

The Republican is believed to have done nothing for nearly three hours as his supporters invaded the Capitol, sowing violence and chaos and forcing elected officials to halt the certification of Joe Biden’s presidential victory.

Since the opening of the hearings, the commission of inquiry has heard from very many people linked to the attack on the Capitol. On Tuesday, June 28, the testimony of Cassidy Hutchinson, ex-assistant of Mark Meadows, the chief of staff of the president during the last months of his administration, revealed the explosive role of Donald Trump in the riots.

Democratic Rep. Jamie Raskin suggested Steve Bannon “changed his mind and after seeing, presumably, all of these people coming forward, including Cassidy Hutchinson, decided he wanted to come.”

News Editor - July 18, 2022 0
The Farnborough International Air Show, which opened its doors under a blazing sun on Monday, July 18, in the greater suburbs of London, is...

Steve Bannon, close to Donald Trump, tried for his refusal to...