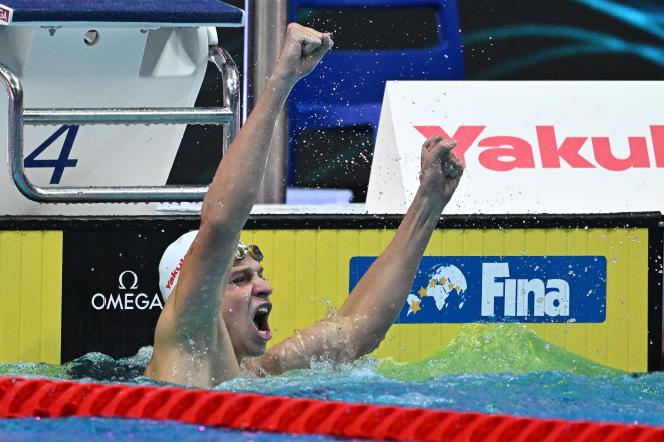 This miracle is sensational. Thanks to Léon Marchand, La Marseillaise will resonate in the Danube Arena in Budapest (Hungary) from the first day of these long course world championships. For his first Worlds, the 20-year-old Toulousain won the gold medal in the 400m medley on Saturday June 18 ahead of the Americans Carson Foster and Chase Kalisz. A title of world champion which already confirms the immense potential seen in the six-time champion of France.

For a first world final, Léon Marchand did not show an ounce of doubt, unimpressed in his number 4 lane. Even better, he literally flew over the race, lowering by more than five seconds (4’04’ ’28) his own French record, achieved in the morning series (4’09”09), but also the European record. He clears the shelves of the Hungarian Laszlo Cseh (4’06”16, achieved at the Beijing Olympics in 2008) and is approaching the world record of Michael Phelps (4’03”84).

“I’m really surprised with my time, I’m world champion and it’s really huge, he savored at the exit of the basin at the microphone of France Télévisions. I came here to make a final and a medal but I didn’t expect to be so fast in the water. That’s so cool, I don’t know what to say. »

After a good start, the Habs were in third position after the first 100m butterfly and then in second position after the backstroke. Then the machine started up. He dug an irreparable gap on the breaststroke before completing the whole thing on the last 100m of freestyle.

The pupil of Bob Bowman – the former coach of legend Michael Phelps – had started his day very strongly. In the morning, in the series of the 400m medley, Léon Marchand had achieved the best time of the entrants thanks to his now shattered French record. He confirmed in the final, without even giving in under the pressure, legitimate for a 20-year-old swimmer who is however discovering the Worlds. Last summer, at the Olympics, he had already taken a promising sixth place.

The charm around the neck, Léon Marchand should be even more free for the rest of the world championships. He will swim the 200m butterfly heats on Monday, June 20, and the 200m medley the next day.

He also perpetuates the family tradition since he becomes the first French medalist at the world championships in long course in medley since his father, Xavier Marchand, silver medalist in the 200m in 1998. Léon has definitely made a name for himself .