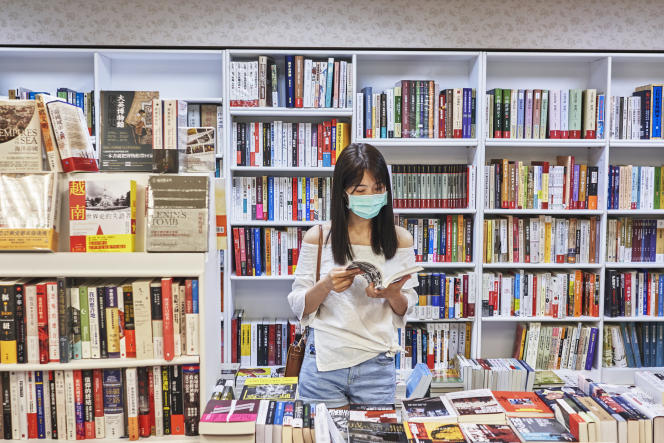 If Yé, the hero without quality of Wang Wen-hsing’s novel, is “back to the sea”, Taiwan, she is indeed facing China. Throughout the year, hunters and frigates from Beijing roam around the island like so many predators convinced that the prey could not escape them. “Reunification with the motherland”, proclaims Xi Jinping, the president of the People’s Republic of China. No, “annexation,” replies Taiwanese President Tsai Ing-wen.

To defend itself, the island has significant assets: the North American umbrella, of course, an exemplary democratic system, but also a strong cultural identity. A “soft power” that should not be underestimated – Ukraine proves it every day – and that Taiwan exploits wonderfully. Symbolically, in Tainan, a coastal city located in the south-west of the island, often presented as its cultural capital, it was in a former air force logistics center that the National Museum of Taiwanese Literature. The defense of the island also goes through the book. Like his diplomacy. One of the functions of the museum is to promote the translation of national works. “Taiwanese literature is now translated in at least twenty countries. This initiative is part of efforts to counteract our diplomatic isolation,” says Pei-Jung Lin, head of literature at the museum. “In French alone, ten to fifteen titles are now translated each year. It’s considerable, “said Pierre-Yves Baubry, founder in 2013 of a blog that refers to:” Letters from Taiwan “.

Taiwan enjoys a multiple identity that makes it unique

This does not mean that the island’s literary production places the question of Taiwanese identity at its heart. That would be decades behind, according to Pei-Jung Lin: “Identity entered the discourse on Taiwanese literature in the 1920s, with the ‘New Literature’ movement, and resurfaced in the 1940s, 1970s and 1980.” The island is also currently commemorating the centenary of the founding of the Taiwanese cultural association, whose figurehead, the poet Lai He, pleaded both for the creation of a Taiwanese parliament – this which got him arrested – and a modern Taiwanese literary style.

Populated by Austronesians for several millennia, Chinese since the 13th century, Dutch since the end of the 16th century, became a Chinese province from 1887, a Japanese colony from 1895 to 1945, then, after the Communist victory on the continent, the last Bastion of the Kuomintang, the historic Chinese nationalist party which subjected the island to four decades of martial law (from 1948 to 1987), and now a democratic island, Taiwan enjoys a multiple identity which makes it unique. The richness of its literature, since the democratization of the country, bears witness to this. “All sectors combined, 40,000 titles are published per year, compared to around 80,000 in France. Not bad for a small country of 23.5 million people, right? notes editor Wu Kun-yung, whose house, Utopia, specializes in the humanities and social sciences.

As if to better turn the page on a nationalist regime dominated by men from China, the literature of the turn of the 20th century consecrated the emergence of different voices. Those of women, like Li Ang, author of the scandalous Tuer son mari (1983; Denoël, 2004), or like Ping Lu who, in a 1995 novel not translated into French, rewrote the story of the mythical political couple formed by Sun Yat-sen (1866-1925, considered the father of modern China) and his second wife and political heiress Soong Ching-ling. Or like Lung Ying-tai, whose essay Ye Huo Ji (“Fire”, untranslated), published in 1984, played an important role in the democratization of the island.

At the time, the voices of the indigenous people also began to be heard, a movement that would continue to grow in importance. This will allow Taiwan to mark, here again, its difference with Beijing, which intends to sinicize the minorities or confine them to a junk folklore. Syaman Rapongan, author of The Memory of the Waves (Paper Tiger, 2011) or Eyes of the Ocean (L’Asiathèque), Topas Tamapima (The Island of Orchids, Ipagine, 2012), or Walis Nokan (Les Sentiers of dreams, L’Asiathèque, 2018) are its best-known representatives.

It was also at the end of the 1980s that a gay culture emerged, with in particular Qiu Miaojin, author of The Crocodile Notebooks (1995; Notabilia, 2021), who committed suicide in Paris in 1995. Or Xu Yousheng, one of whom untranslated novel recounts the love between a Chinese and a Taiwanese in New York, adding to the homosexual issue that of relations between the island and the continent, one year after the Tiananmen massacre (1989). Xu Yousheng will be, in 2019, one of the very first Taiwanese to take advantage of the legislation authorizing gay marriage.

Let us add another type of author whose work is linked to the political history of the country: with the death of the president of Taiwan and historical figure of the Kuomintang, Chiang Kai-shek, in 1975, and the recognition of Beijing by Washington, the nationalists lose all hope of “liberating” China; their future and that of their children will be permanently embedded in this island of which they are the masters without really being at home there. When the fathers lay down their arms, the children take up the pen. A literature of “garrison villages” was born, named after these neighborhoods hastily built on the outskirts of cities to shelter – in principle temporarily – these nationalist families. Authors from their ranks include: Chu T’ien-hsin (To my brothers from the garrison village, Bleu de Chine, 2001), his sister Chu T’ien-wen, and Chang Ta-chun (La Stele general, Picquier, 1998).

All these categories bear witness to the diversity of Taiwanese literature at the end of the last century, even if it meant obscuring its quality. “The Taiwanese literary history of the last two decades of the 20th century reveals a basic trend: more than ever it is written not in terms of literary currents but according to groups (defined by their origins or their ethnicity, even their gender ) who coexist on the soil of the island, even if they claim, more and more, the same Taiwanese identity”, note Angel Pino and Isabelle Rabut, in the introduction to Félix s’épanou pour le pays. , fourth volume of a historical anthology of Taiwanese prose (You Feng, 2018).

But, in the 21st century, these categories are gradually fading. “There are still writers stamped ‘green’ [like the currently ruling Democratic Party] or ‘blue’ [color of the Kuomintang], but the younger generations have moved on from those old quarrels. For them, Taiwanese identity is no longer a subject, it’s a reality,” notes Pierre-Yves Baubry.

Born in 1972, Chi Ta-wei, the translator of Italo Calvino into Chinese, is one of the writers who project themselves into the future and whose works have a universal scope. After Membrane (1996; L’Asiathèque, 2020), a science fiction novel that marked all of Asian queer literature, Perles (L’Asiathèque, 2020) continues to question the future of human beings confronted with technologies that he no longer controls.

Far from this SF vein, we see a development of non-fiction books. An outstanding author of works committed to bearing witness to reality resides in France. Born in 1973, illustrator Li-Chin Lin stood out with Formose (Here and There, 2011), a comic strip telling the story of the brainwashing suffered by her generation in the last years of martial law. Her latest book, Fudafudak, the place that sparkles (Here and There, 2017), is a report on the struggle of two Taiwanese farmers supported by activists and aborigines against a luxury hotel and the local government.

Pressure from the Chinese authorities

Whatever furrow they dig, and whether they like it or not, Taiwanese writers are not immune to geopolitics. Wu Ming-yi, best known for his environmental commitments, was among the authors selected for the prestigious British Booker Prize in 2018 with The Stolen Bicycle (Danche shiqie ji, “The Stolen Bicycle”, untranslated), a novel in which the main character, gone in search of his father, retraces the history of Taiwan in the 20th century. What was his surprise to discover that the initial list of writers, after having indicated “Wu Ming-yi, Taiwan” had been changed to “Wu Ming-yi, Taiwan, China”. Criticized for having, in all likelihood, yielded to pressure from the Chinese authorities, the Booker Prize officials have decided to… remove the nationality of the authors in the running.

Xi Jinping, who likes to present himself as a “passionate reader”, claims to particularly appreciate the great classical Chinese authors but also Tolstoy, Dostoyevsky, Goethe, London, Hemingway, Balzac, Hugo, Maupassant and Shakespeare. No Taiwanese author, one suspects, is among his bedside books. Too bad for him.