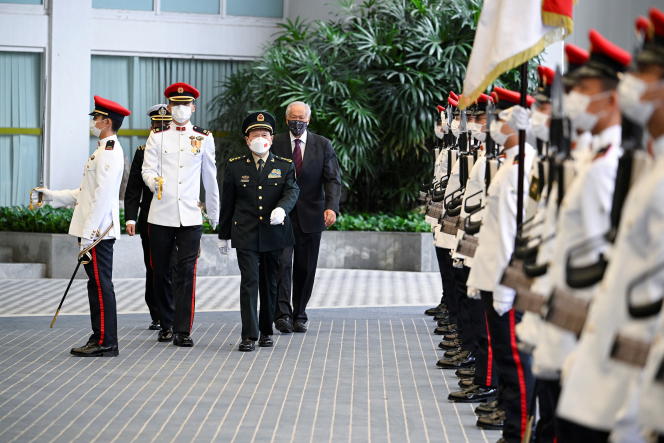 The threat sets the tone for the meeting that took place on Friday June 10 in Singapore between the Chinese Minister of Defense and his American counterpart. Beijing has warned that it will “smash into a thousand pieces” any attempt at independence for the island, saying that “the Chinese military will not hesitate for a moment to start a war, no matter what the cost. said a spokesman for the Chinese ministry after the meeting, reporting Minister Wei Fenghe’s remarks.

US Secretary of Defense Lloyd Austin told his Chinese counterpart that Beijing should “refrain” from any further destabilizing action toward the island of Taiwan, the Pentagon said.

First meeting against a background of tensions

This meeting, organized on the sidelines of the Shangri-La Dialogue security forum, against a backdrop of disputes between the two rival powers, was a first since Lloyd Austin took office. The two men had spoken by telephone in April.

The subjects of friction have multiplied in recent years between the two countries: South China Sea, growing influence of China in Asia-Pacific, war in Ukraine, or even Taiwan.

China considers this island of 24 million people to be one of its historic provinces – even if it does not control the territory – and has been increasing military pressure against Taiwan for several years.

The meeting between Wei Fenghe and Lloyd Austin takes place a few weeks after the incursion of thirty Chinese military planes into the Taiwan air defense identification zone – the largest operation of its kind in 2022. For the United States, these incursions are a sign of “increasingly defiant rhetoric and activity” from Beijing.

During a visit to Japan last month, President Joe Biden appeared to have broken with decades of American policy when, in response to a question, he claimed that Washington could militarily defend Taiwan in the event of an invasion by Beijing. The White House has since insisted, however, that “strategic ambiguity,” the deliberately vague concept that has governed Washington’s policy on Taiwan for decades, remains unchanged.

In response to these statements by the American president, China urged the United States “to avoid sending the wrong signals to the independence forces” in Taiwan. The United States is “playing with fire,” Beijing warned, according to the official New China news agency. The United States is “using the ‘Taiwan map’ to contain China and will burn itself in it,” said Zhu Fenglian, spokesperson for the Taiwan Affairs Office of the State Council, often described as the Chinese government. .