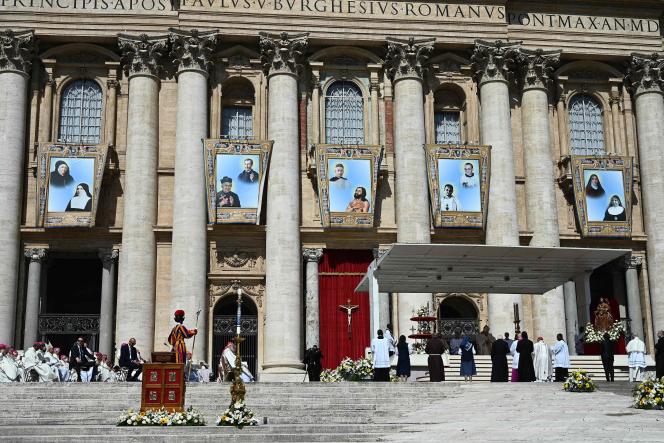 Pope Francis proclaimed ten figures of the Catholic Church “saints” on Sunday May 15 in front of thousands of faithful from around the world gathered in St. Peter’s Square in Rome. Their portraits hung on the facade of the largest basilica in the world.

Among the official delegations, the French Minister of the Interior, Gérald Darmanin, stood near the Italian President Sergio Mattarella. Prime Minister Jean Castex was initially expected at the ceremony, but Emmanuel Macron’s trip to the United Arab Emirates to pay tribute to dead President Khalifa Ben Zayed Al Nahyane finally forced him to stay in France.

Unlike in recent days, Pope Francis, 85, who suffers from knee pain, did not appear in a wheelchair before presiding this mass, alongside about 50 cardinals and 300 priests and bishops.

Canonization, the step to becoming a “saint” in the Catholic Church, following beatification, requires three conditions: to have been dead for at least five years, to have led an exemplary Christian life and to have performed at least two miracles.

Among these ten “canonized” are three French: the hermit Charles de Foucault, who was assassinated in 1916 in Tamanrasset, in the Algerian desert south, as well as the French religious Marie Rivier (1768-1838) and César de Bus (1544-1607 ).

The other two canonized are the Dutch priest and journalist Titus Brandsma, known for his commitment against Nazi propaganda during the Second World War, and the martyr Devasahayam (Lazare) Pillai (1712-1752), a Hindu convert to Christianity, the first layman Indian to become “holy”, according to the Vatican.