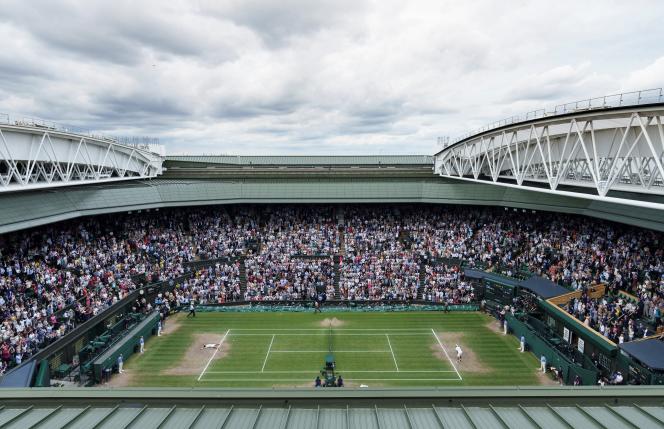 Temple of tradition and propriety, Wimbledon is not really known to be the most turbulent of the four Grand Slams. This year, it could be different on the outskirts of the neat All England Lawn Tennis and Croquet Club, in the south-west suburbs of London. Even before the event took place (from June 27 to July 10), its members sparked a controversy that will go down in the history books.

Siding with the advice of the British government, they decided to exclude Russians and Belarusians individually, in response to the invasion of Ukraine by Moscow, with the help of Minsk, at the end of February. “In the circumstances of unjustified and unprecedented military aggression, it would be unacceptable for the Russian regime to derive any benefit from the participation of Russian or Belarusian players”, justified the organizers on April 20, taking the opposite view of the three other Grand Slam tournaments, where they are allowed to participate under a neutral banner.

To defend her chances there, Russian Natela Dzalamidze, 43rd in the world in doubles, has changed nationality, the British daily The Times revealed on June 18. The 29-year-old is now Georgian.

The political decision of the All England Club satisfies a handful of Ukrainian players. But if it is supported by the tennis federations of Sweden, Finland, Norway and Iceland, it is far from unanimous. In retaliation, the ATP, which manages the men’s professional circuit, and the WTA, its counterpart for the women’s circuit, have decreed that they will not distribute any points this year at the London Grand Slam. For both bodies, it is the “fundamental” principle of fairness that is called into question: the possibility for all to participate in all tournaments “according to their merit and without discrimination”.

The International Tennis Federation (ITF) followed suit by depriving junior and wheelchair tennis tournaments of points. “The position of the ITF remains that Russian and Belarusian players must be allowed to participate as neutral athletes”, justified the federation, which has also banned since March 1 the two countries from participating in any international competition. by teams.

Wimbledon is therefore reduced to a “simple” gala competition. At Roland-Garros, at the end of May, the hot topic sprang up almost at every press conference. Naomi Osaka is the only headliner to have hinted in Paris that she would not tread the sacred turf. “I feel like if I play Wimbledon without a point, it’s more like an exhibition,” the Japanese woman said, referring, in an unintentional pun, to a “pointless” tournament (which both means ” no dot” and “useless”). The former world number one formalized her withdrawal on June 18, citing a persistent Achilles heel injury.

The ATP and WTA retaliatory measure will have cascading consequences on the rankings of the best players, who will lose their points from last year and will not be able to score new ones. Finalist of the 2021 edition, the Italian Matteo Berrettini will come out of the top 20, even if he lifts the trophy on July 10. “Knowing that winning three tournaments in a row including a Grand Slam won’t be enough to prevent you from falling from 10th to beyond 20th place is ugly. It’s unfair and not really correct, “protested the recent winner of the Stuttgart and Queen’s tournaments on June 17 in L’Equipe magazine.

The defending champion, Novak Djokovic, will lose the 2,000 points awarded to the Wimbledon winner, who had already banned German and Japanese players for several years after the Second World War. The Serb sees the exclusion of Russians and Belarusians as a “mistake”. But he never considered skipping the tournament: “Grand Slam tournaments remain Grand Slam tournaments, summarizes the world No. 2, and Wimbledon was always a dream for me when I was a child. I don’t see it through the prism of points or prize money. »

The world number one, Iga Swiatek, also comes to seek prestige there: “At the Olympics, we play for medals [and not points] and that is still very important. Whoever wins Wimbledon will always have that on his list, ”insists the Pole, who has never passed the round of 16 there.

The most modest players on the circuit can hardly do without the bonuses distributed in London: “From a financial point of view, we players who go through the “qualifiers”, we have to go there. It is not with the 400 euros in the first round of the Challengers [the second division of the circuit] that we pay for our season ”, summarized at Roland-Garros the French Grégoire Barrère, 185th in the world. True to his unfiltered talkativeness, his compatriot Benoît Paire does not bother with his ranking (76th): “I find it difficult to understand the thing, if the ATP rather defends the players or defends Russia. Me, I’ll go there to get my check anyway! »

How to attract the undecided or just a coincidence? This year, the organizers will offer a record amount of more than 40 million pounds (46.3 million euros). That is an increase of 15% compared to 2021, when the capacity for the reception of the public had been reduced due to the Covid-19, and of 6% compared to the last tournament played without gauge, in 2019.

On social media, some have not hesitated to call Wimbledon “the biggest exhibition tournament in the world”. “Shocking”, in the eyes of Sir Andy Murray, who immediately came to the rescue of the national jewel, where he was crowned in 2013 and 2016. “I bet most Center Court spectators won’t know or care the number of points a player collects for a victory in the third round, wrote the Briton on Twitter. But I guarantee they will remember who came out on top. Wimbledon will never be an exhibition and will never look like an exhibition. End of the discussion. »