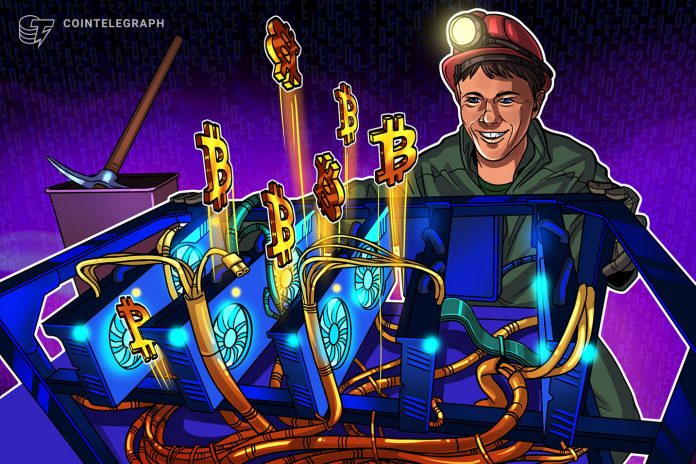 The fractal setup was visible at the start of the Bitcoin price rallies of January 2019, January 2020 and March 2020.

Glassnode, a blockchain analytics platform, discovered a golden cross between Bitcoin’s 30-day and 60 day moving averages. In theory, such a crossover indicates that the price momentum is switching from negative to positive.

Based on Bitcoin’s network behavior, hash ribbons can be used to inform investors when there is upside potential. They show when Bitcoin is more costly to mine than the base cost of mining.

Miners earn less in U.S. dollar terms during Bitcoin price corrections. To pay their operating costs, they sell newly minted Bitcoins to raise capital. To reduce operational costs, they also tend to close down machines, resulting in a decline in the hash rate of the Bitcoin network.

Bitcoin’s automatic difficulty adjustments mean that hash rates can recover. This reduces the cost and makes it easier for less-efficient miners who want to join the mining pool. In doing so, miners also accumulate coins, thereby ending the capitulation period.

Therefore, hash ribbons demonstrate miners’ sentimental switch from capitulation to accumulation. This provides traders with a way to determine the potential price bottoms of the spot market.

The history of Bitcoin has demonstrated that its price has followed the signals from the hash-ribbon.

The chart below, for example, illustrates numerous instances when a crossover between 60-day (green) hash ribbon moving average and 30-day (blue), has prompted Bitcoin bulls towards upside moves.

For instance, the so-called supply squeeze event in December 2020 coincided with the green-blue moving average crossover. Bitcoin’s closing bid that month was $28,990. It soared to $62,971 in April 14.

Similarly, the bear capitulation of 2019, the January 2020 mini-bear cycle, March 2020’s coronavirus-induced crash and May’s halving event happened alongside the green-blue moving average crossover. Each one was followed by an upside move on the Bitcoin market.

Glassnode described the recent bullish crossover as part of the “Great Migration Recovery.” In detail, China’s crackdown on the crypto sector in May forced regional miners to discontinue operations. Some decided to shut down completely under Beijing’s regulatory watch, while others moved their mining operations abroad.

However, the hash rate was back to 119.12 millions TH/s as miners relocated to Canada, Kazakhstan and Russia as of August 17.

Glassnode noted that the 30D hashribbon crossed above 60D historically when the worst of the mining impacts is over and recovery is underway.