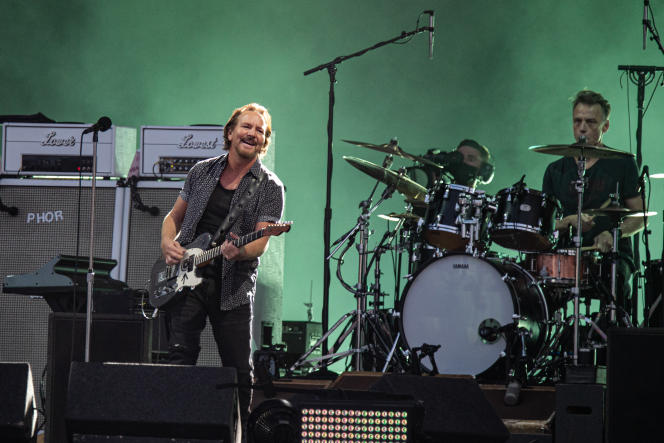 All the midinettes of this Sunday day jostle to take selfies under the replica of the Eiffel Tower, installed on the Longchamp racecourse. She is the real mascot of the Lollapalooza Paris festival for five editions. And even if this 34-meter high copy is naturally less impressive than the original, it is easily distinguishable from any point of the five hectares occupied by the festival. A kitsch monument like the Americans know so well how to erect in amusement parks.

Originally founded in 1991 in the United States by singer Perry Farrell, of the alternative rock group Jane’s Addiction, the Lollapalooza festival was bought by the American giant Live Nation in 2010 and has since been exported to Sao Paulo, Santiago, Buenos Aires , Berlin or even Stockholm. This fifth Parisian edition attracted a total of 135,000 spectators, compared to 95,000 in 2019. A figure which corresponds to the expectations of the promoter (which also manages the Main Square Festival in France), after the difficult context of two blank years due to the Covid. The programming is, as always, on eclecticism, a sometimes disconcerting mix of urban music, rock and electro. Thus, the first day, Saturday 16, took place with the popular pop rock of Imagine Dragons, the Latin electro R’n’B of Anitta, or David Guetta.

The generation gap is even wider this Sunday, divided between an audience of rockers in their forties who grew up with the anger and despair of the grunge movement in the early 1990s, and a more colorful and connected generation Z, focused on urban music, came en masse to see the rapper ASAP Rocky and the sulphurous Megan Thee Stallion. Faced with this largely hip-hop poster, rock still has a handful of worthy representatives, such as the Turnstile quintet, from Baltimore (Maryland). The hardcore punk band have become one of the hottest stage attractions of the moment, and no doubt they have won a new audience at Longchamp. Nantes’ Ko Ko Mo are not to be outdone, on one of the small stages: the guitar/drums duo is terribly effective, with its seventies hard-rock look. For more subdued atmospheres, the folkloric Phoebe Bridgers also seduced.

Ten years that France has been hoping for the return of Pearl Jam! The last appearance of one of the two great groups from Seattle (the other being Nirvana) dates back to 2012, at the Main Square festival in Arras. This unique French date was therefore eagerly awaited. At 9:35 p.m., an already very dense crowd applauded the quintet, which started with a bang on the quasi-punk Why Go, taken from their first album Ten (1991).

The formation is famous for never playing the same set list from one concert to another. His vast repertoire allows you to draw from his eleven studio albums, the first five of which are considered rock classics across the Atlantic. After a nod to the song Interstellar Overdrive, by Pink Floyd, singer Eddie Vedder begins, on his Telecaster, the intro of the vibrant Corduroy, taken from Vitalogy (1994). The faithful pair of guitarists, Stone Gossard and Mike McCready, are distinguished by their mastery and elegance, whether on the furious electric anthems Even Flow and Go, or, in sensitive folk rock mode, on Daughter, or even on the false ballad Jeremy. On stage, the decor is kept to a minimum: untidy Marshall amps, an unused electric organ tonight. The quintet is accompanied by two keyboardists, including Josh Klinghoffer, ex-member of the Red Hot Chili Peppers.

At 57, singer Eddie Vedder looks more and more physically like Bruce Springsteen. A legitimate filiation, as his group, after more than thirty years of activity, now ranks in the so-called “classic rock” category, alongside Neil Young and the New Jersey boss. The leader, very close to the public, tries a few hesitant words in French: “It’s been a long time, thank you for inviting us to your party. During Not for You, he pauses to denounce the lies of politicians, alluding to the former President of the United States: “I can’t stop thinking about the people of Ukraine. All because of a damn liar! “And does not hesitate to suddenly stop a song to ask the crowd to help a festival-goer in difficulty in the first rows.

The group is known for its three-hour marathon concerts. But, after an hour and a half of an intense and generous performance, the constraints of the festival organization force an encore, which ends with their historic first single Alive, then with an incandescent cover of Baba O’Riley, of the Who . ” See you next year ! “Launches the singer, greeting the Parisian public – we promise, no need to wait another ten years.