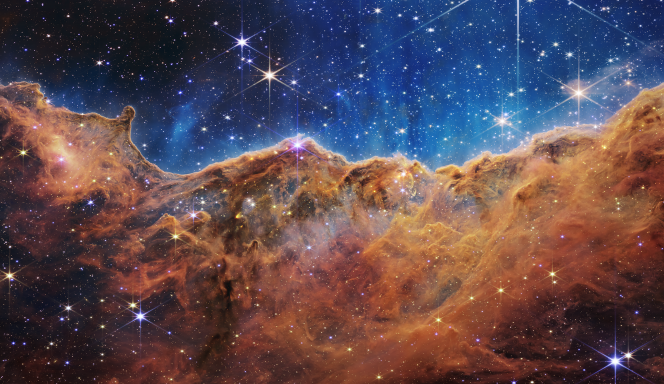 Finally ! More than thirty years after astronomers imagined putting it into orbit one day, the James-Webb Space Telescope (JWST), the result of a collaboration between the American, European and Canadian space agencies, delivered its first images on Monday 11 and Tuesday, July 12. And what images: nebulae, clusters of galaxies, gravitational lenses…like we’ve never seen them before!

Big deal ! some will say. The planet is burning, and we are looking elsewhere, far beyond, not to mention that the “James-Webb” will have seen its cost multiplied by twenty in three decades. Adding the operating costs, the bill reaches 9.5 billion euros – a little more than the 2024 Paris Olympics -, to enter the category of “too big to fail” projects, constantly bailed out to avoid the collapse of a sector. Shouldn’t we be thinking about refocusing research efforts on solving Earth’s crises?

The Honor of Humanity

Certain criticisms of the management of these megaprojects, questions about the carbon footprint and negative externalities of research activities, as well as calls for more “involved” work, are undoubtedly justified. But, in these times of all-out “whatever it takes”, basic research, even in its most ambitious projects, is not superfluous. It is the honor of humanity, which in these challenges can find the opportunity to overcome its rivalries and even its divisions.

With the JWST today, in other astronomical observatories such as those of ESO, with the International Space Station, with the gravitational wave detectors LIGO and Virgo, with CERN and its large accelerator whose successor could see smash particles in… 2050, or ITER, which is working to domesticate nuclear fusion at an as yet undetermined date.

The war in Ukraine has complicated some large instrument programs: international scientific cooperation regularly finds itself hostage to such conflicts, and some major powers see the scientific lone rider as another way to mark their territories. But these cross-border collaborations offer other horizons. Accomplishing them often involves decades of concerted effort, linking generations and nations together.

Isn’t it dizzying to think that the next mission to Uranus will only arrive at the confines of the icy giant in 2044, and that some of its craftsmen, like the builders of cathedrals in the past, are aware that they will stand on the threshold of this promised planet?

The quest for knowledge for its own sake is a horizon in itself, which it is not essential to enslave to the modern religion of solutionism. Should we, as the Ministry of Research did, salute a Fields Medal by reassuring ourselves about the social utility of mathematics, yet often practiced at this level as a pure mind game?

Scientific activity is certainly part of the wealth of nations, and its strength is not indifferent to their rank, it should not be forgotten in the next budgetary arbitrations, at a time when inflation will soon nibble away at promised rebalancing efforts.

But it is more than that: its results are an opportunity for every human to question their place in the Universe, to listen to the eternal silence of infinite spaces. And perhaps enriched with this knowledge, and weighted with the immensity of what still remains to be discovered, to better cherish our Blue Orange, a fragile haven drifting in the cosmos.