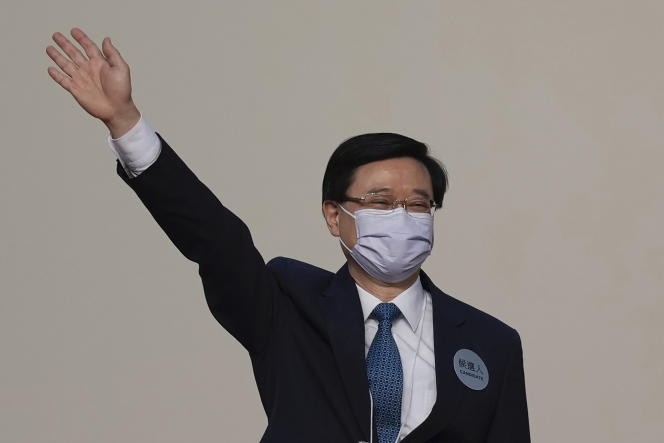 Hong Kong’s next chief executive, John Lee, will meet Chinese President Xi Jinping in Beijing on Saturday to officially endorse his appointment, just over a month before taking office. During this four-day visit to China, Mr. Lee will also meet with senior Chinese leaders, according to Hong Kong media. He is expected to meet with the Chinese president, who must notably approve the list of people who will form his team, the South China Morning Post reported.

He was the only candidate to succeed outgoing leader Carrie Lam. At 64, the former Hong Kong security boss, who had overseen the repression of the pro-democracy movement, was appointed in early May by a small “electoral committee” loyal to Beijing. A new electoral system, wanted by Beijing, was put in place in 2021 to ensure that Hong Kong is ruled exclusively by “patriots” loyal to the Chinese regime.

Over the weekend, the future chief executive will have to undergo screening tests and observe quarantine, as part of the anti-Covid measures in force in China. Mr Lee will take office on July 1, the 25th anniversary of the UK’s handover of Hong Kong to China. His presence at these two events has not yet been confirmed.

John Lee’s visit would be the president’s first trip outside mainland China since the pandemic began. In 2017, he made a three-day visit to Hong Kong to attend, among other things, the swearing-in of Ms. Lam.

This trip was marked by demonstrations. A protest movement is unlikely to happen again this year, as Beijing has for two years imposed a draconian national security law to suppress dissent. According to the Hong Kong weekly Eastweek, more than 10,000 police will be deployed across the city in connection with a possible visit by Mr. Xi.

Local authorities are trying to find a way to protect the president from any risk of Covid-19 contamination, Hong Kong and China remaining committed to the zero Covid strategy. Mr. Xi Jinping could choose to spend only one day in Hong Kong or to give up his trip completely in the event of the appearance of new epidemic foci, according to the Wall Street Journal.