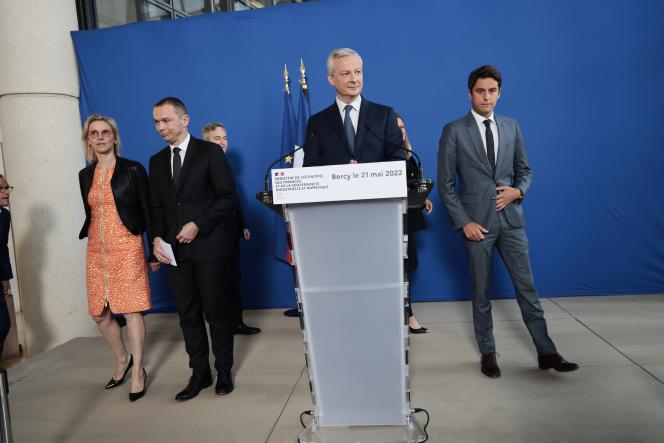 The electoral sequence since the presidential election in April, then the political negotiations between parties from the legislative elections of June 12 and 19, which saw Emmanuel Macron lose an absolute majority in the National Assembly, have repeatedly delayed the deadline .

The government has finally just adjusted its forecast of economic growth for the current year, which we knew was outdated since the escalation of the Ukrainian conflict caused by the Russian invasion at the end of February, and the supply difficulties from from China. Gross domestic product (GDP) should only increase by 2.5%, against 4% forecast in the 2022 budget voted at the end of last year, Bercy announced on Tuesday, June 28.

No increase in taxes or public deficit, says Bercy

On the other hand, the public deficit should not increase, despite the billions of euros spent by the government to support the purchasing power of the French. It is still expected at 5% of GDP this year. And this, because of significantly better than expected tax and social security revenues (about 50 billion more than initially envisaged). Bruno Le Maire, in an interview with Les Echos, assures that the figure remains “particularly reassuring in a difficult geopolitical context, marked by confinements in China and difficulties in the supply of raw materials”. The increase in employment has made it possible to garner dynamic social contributions and levies, while revenue from income tax, corporation tax and VAT are proving “very resilient”, according to Bercy.

However, there is no question of talking about “kitty”, we cry out to the Ministry of Finance. “This word is absolutely unacceptable,” sweeps Bercy. On the other hand, this deficit forecast “integrates the measures of the purchasing power package”, which must be presented, at the same time as a draft amending budget, on July 6 in the Council of Ministers, and whose exact cost (more of 20 billion euros) is still unknown. “So we don’t have the leeway” to integrate costly proposals from the opposition, it says, implying that “if we give on one side, we will have to take on the other”.

Public debt is expected at 111.9% of GDP at the end of the year, against 113.5% initially forecast. The economy should continue to create jobs, after 80,000 jobs created in the first quarter, announces Bercy.