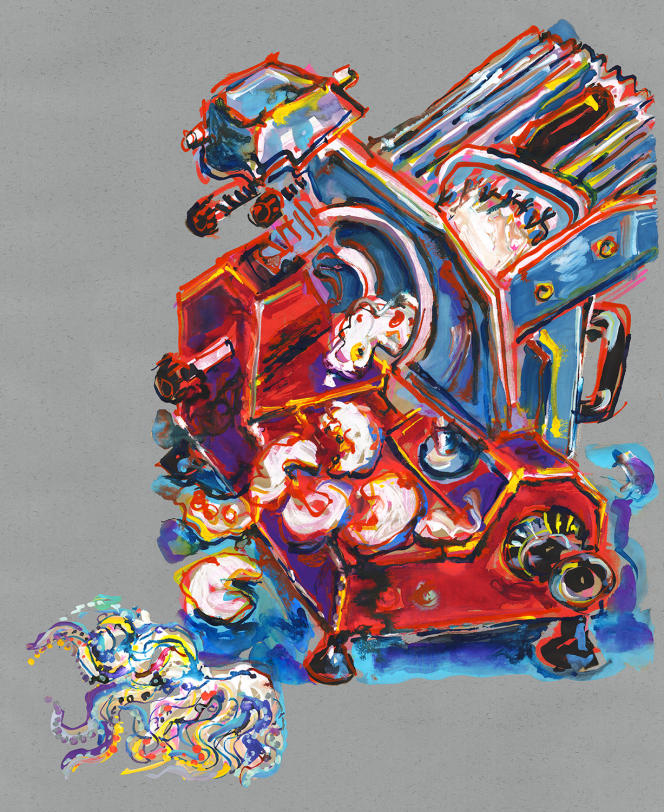 It’s the most sensual back and forth in the culinary world. The butcher’s hand takes hold of an Iberian ham, caresses its rough back, then delicately lays it out on a metal trolley. The block of crimson flesh then travels under the sharp edge of a circular blade launched at full speed. ” And with this ? asks the craftsman, as the fleshy petals fall into a crumpled pattern in the center of a large sheet of gingham paper.

We owe the invention of the ham slicer to Wilhelmus Van Berkel. In his workshop, the Dutch butcher, passionate about mechanics, has a single obsession: to obtain the “perfect slice”, between 0.1 millimeter and 4 millimeters. In 1898, on a stroke of intuition, he developed the Volano Rossa, a slicer mounted on a foot, which became cult among design enthusiasts. A cast iron base supports a tray consisting of a trolley, on which rests the food to be sliced, and a circular saw about 30 centimeters in diameter.

By turning a wheel, a belt transmission is activated which moves the carriage forward and backward under the blade. Popular in food shops and collective catering establishments, mechanical slicers from the Berkel brand gradually fell into disuse, starting in the 1950s, in favor of electric slicers, better suited to domestic use.

In Marseille, the dining room of the Sépia restaurant offers a bird’s eye view of the roofs of the buildings that hug the bay of the Old Port. With the help of his Berkel flywheel slicer, “a little marvel, produced in only 25 copies”, Paul Langlère revives an old Marseille culinary tradition: bottled octopus.

“It’s a fisherman’s trick that allows you to work the octopus into extra-thin slices, like a carpaccio,” explains the chef. Preparation begins the day before: wash and cook the octopus in a court-bouillon, at a simmer, for 1.5 hours, then let cool, drain and coarsely chop. “Then you squeeze the pieces into the bottom of a plastic bottle cut in half – and put it in the freezer to sit. We obtain a compact and homogeneous block that we can pass through the slicer. »

Paul Langlère turns the crank of his manual Berkel and slides the frozen octopus sausage under the blade. From the hollow of the opposite palm, Paul Langlère collects half a dozen purplish washers which he arranges in a rosette at the bottom of a round plate. To this mosaic, he adds fresh peas, broad beans, grilled artichokes and a few crumbs of ricotta. All iodized with a vinaigrette whipped with red mullet livers.