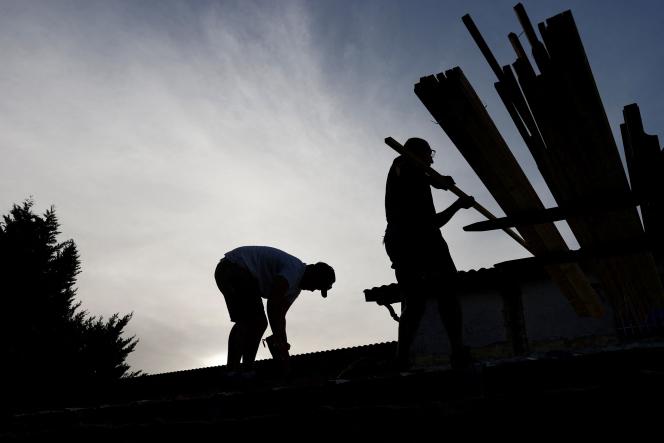 As for the twenty-five departments on orange alert, they are located from the Pyrenees to the south of Brittany, to Drôme and to the east of the country:

This is the fourth time that heat wave red vigilance has been activated since 2003, when the system was put in place after the lessons learned from the historic heat wave which caused the death of more than 15,000 people that year. people in France. But this time, the phenomenon occurs earlier in the season than usual. The highest level of the National Heat Wave Plan corresponds to both an exceptional weather event and a health alert justifying “maximum mobilization”.

Schoolchildren and college students will be able to stay at home on Friday in the twelve departments placed in heat wave red vigilance, announced the Ministry of Education, which specifies, however, that the reception of students will be ensured, subject to “possible closure decisions taken by the prefectural authorities”, added Rue de Grenelle.

The thermometer climbed to 40°C on Thursday in Saint-Jean-de-Minervois, in Hérault – a record for earliness for mainland France excluding Corsica. This record was recorded at 4:32 p.m., said Météo-France.

The heat wave had already started on Wednesday with twenty-three departments on orange alert and temperature records for the month of June which should be broken over the next few days. The thermometer will continue to climb to reach 36 to 39 ° C, Thursday afternoon, in Occitania, New Aquitaine and in the Rhône valley, with temperatures remaining high at night.

At Météo-France, Olivier Proust also plans “a massive extension of vigilance” to other departments. “The heat wave peak will take place on Friday and especially on Saturday, with a situation that would often exceed the intensity of [the heat wave of June and July] 2019, with unprecedented temperatures for the month of June. »

Saturday, “we expect 40 to 42 ° C from the south [of ] Aquitaine to Berry, and 35 to 40 ° C almost everywhere [elsewhere]. Only the coasts of the English Channel, western [of] Brittany and the Mediterranean rim are spared by the threshold of very high heat, ”he adds.

Increased vigilance regarding the elderly

With the heat, air quality has also deteriorated in Ile-de-France as well as in several departments of Occitanie, Provence-Alpes-Côte d’Azur and Hauts-de-France. In large cities, where the density of buildings accentuates the feeling of furnace, the opening hours of parks and gardens have been extended.

Almost twenty years after the heat wave of the summer of 2003, which had caused the death of 15,000 people, nursing homes are adapting with watering of facades, ice cubes in drinks, fans and prolonged sequences in air-conditioned rooms. The situation of isolated and therefore more vulnerable elderly people is of particular concern. The Ministry of Health has activated a free Canicule info service number (08-00-06-66-66) to answer questions and give practical advice.

For their part, the firefighters, on alert, watch for the outbreak of fire, favored by the heat and the drying of the vegetation. Thus a fire destroyed 25 hectares Thursday in Aveyron, and a hamlet of around thirty inhabitants was evacuated. Farmers were called to vigilance regarding “vegetation fires during the harvest” by the prefecture of Deux-Sèvres, where a hundred hectares burned on Wednesday.

In the Landes, the prefecture has restricted from 2 p.m. to 10 p.m. vehicle access to rural roads, forest and cycle paths, as well as logging and certain recreational and sporting activities. It is now notably forbidden to smoke and bivouac in the forest.

The sustained southerly wind is expected on Saturday in France, increasing the risk of fire. In the South-East, the mayor of Nice, Christian Estrosi, announced that he had asked the government to “be able to reuse treated wastewater”, in particular for cleaning streets and roads, as well as supplying decorative fountains.

France is experiencing increasingly frequent heat waves: the multiplication, intensification and lengthening of these phenomena constitute an unequivocal marker of global warming, according to scientists.