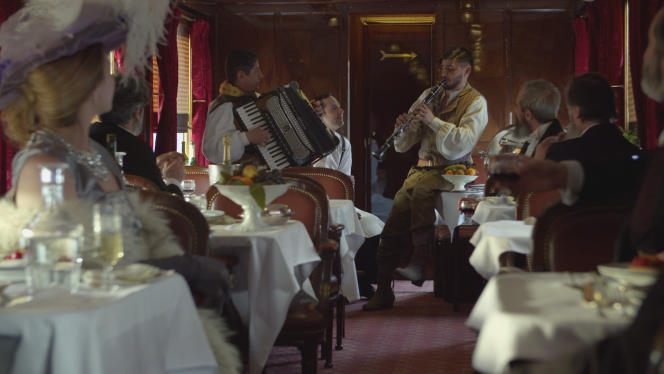 We have forgotten it, but the creation of the Orient-Express, a rolling jewel that will remain for many the most famous crime scene, marked a decisive stage in the development of rail in Europe. It is the story of this technological and aesthetic revolution that this documentary by Louis Pascal Couvelaire offers to (re)discover.

Told by actor Charles Berling, the story is that of the dream of Georges Nagelmackers (1845-1905), a Belgian industrialist who, after studying the rise of the transcontinental railroad in the United States, decided to launch the Compagnie des wagons-lits in Europe and to offer unprecedented comfort for long-distance journeys.

Golden age in the interwar period

The first Orient-Express, whose carriages were then made of teak, left Paris in 1883 with only about forty people on board. Direction Istanbul (then Constantinople), via Strasbourg, Munich, Vienna, Budapest. It takes some thirty different engines to go the distance, crossing several countries in such a refined setting at an impressive speed for the time. A few years later, the Orient-Express provides three connections per week and is always full. Emboldened by his success, Nagelmackers embarked on the adventure of the Trans-Siberian, which turned out to be a money pit. He will die ruined, but his company will survive him.

After the First World War, during which military convoys took priority, the Orient-Express was reborn in the interwar period and experienced its golden age, embodied by new dark green metal carriages – the best known – , decorated by big names in Art Deco (Lalique, Prou). It was at this time that Agatha Christie wrote the bestseller that would help maintain the legend.

Looted, scattered across Europe during the Second World War, the green wagons are synonymous with humiliation for France – one of them served as the framework for the signing of the Franco-German armistice in 1918, then to that of 1940, in the clearing of Rethondes (Oise). The “glorious thirties” will see the advent of air transport, preferred by wealthy travelers, now in a hurry. The Orient-Express will make its last trip in 1977, before becoming a museum piece.

Sitting at a table in the dining car or in a plush lounge, historians and journalists take turns trying to understand the role of this line in the unification of Europe and its opening up to Turkey. The reconstructions in costumes, enriched with sophisticated special effects, are rather successful. Of a comfortable length, this film has, as often on such a subject, the defects of its qualities: very – too much? – rich, it covers a century of history at full speed where one would perhaps have preferred, like a traveler in the long course of the 1920s, to take a little more time.