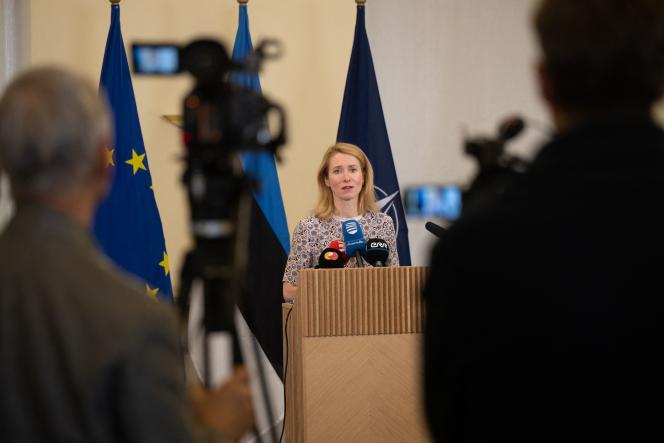 Will Kaja Kallas, who in recent weeks has earned the nickname “Europe’s new iron lady” due to her relentless attacks on Vladimir Putin, risk losing her post as Prime Minister of Estonia? Under his very firm leadership, Estonia is, together with Latvia, Lithuania and Poland, at the head of the camp of hardliners who advocate the defeat of Russia in order to save Ukraine and, beyond, Europe.

In place since January 2021, Kaja Kallas dismissed, on Friday June 3, the seven members of the Center Party (center left), led by former Prime Minister Jüri Ratas (2016-2021). She finds herself at the head of a now minority government.

Since then, negotiations have been going well between different parties to form a new coalition which it could bear the brunt of, as well as Ukraine, by extension. The conservative People’s Party (EKRE, far right), which is participating in the discussions, has made statements in recent months, calling for an end to welcoming refugees from Ukraine and to close the borders.

“If Kaja Kallas has to leave her post, Ukraine will lose a strong and visible supporter,” said Kristi Raik, director of the Estonian Foreign Policy Institute. “And Estonia’s international position would suffer,” adds Heiko Pääbo, a political scientist at the Institute of Political Studies in Tartu.

The current crisis has at least two reasons. The first is due to the hostility between liberal Kaja Kallas and her predecessor, Jüri Ratas, whose party traditionally attracts the vote of Russian-speaking voters, who make up about a third of the country’s inhabitants. Mr Ratas served as prime minister from 2016 to 2021, but his party was embroiled in a corruption scandal. When Ms. Kallas formed her government in 2021, notably with the Center Party of Jüri Ratas, the latter, splashed by the corruption affair, did not obtain a ministerial portfolio, which fueled tensions between the two leaders.

Second reason, the war. In these turbulent times, Kaja Kallas’ Reform Party benefits from her very committed reputation on security and foreign policy for the benefit of Estonian sovereignty. “The war in Ukraine had the effect of increasing the popularity of Kaja Kallas and lowering that of the Center Party,” explains Mr. Pääbo.

The competition between these two parties and the hostility of the leaders pushed them to oppose on principle bills coming from the other side. “The Center Party tabled a bill with the opposition to double child benefits, which the prime minister saw as a betrayal from a coalition party,” notes Tonis Saarts, a political scientist at the university. from Tallinn.

Conversely, the Center Party rejected a bill brought forward by the Prime Minister’s party to extend the teaching of the Estonian language, from nursery school, to all establishments in the country, including Russians.

What the “Iron Lady”, who returned from London a few days ago, after receiving an award for her international leadership, did not appreciate. “When I became Prime Minister, she said, I promised to dedicate my strength to strengthening the future of the Estonian people. This cannot be done through military spending alone, but rather through the united and unwavering will of our people to defend our independence. Fluency in Estonian is both a prerequisite and the foundation of this desire. In a situation where the Center Party is actively working against the core values ​​of Estonia, we cannot continue to cooperate with it. »

Coup de force? The Center Party has long suffered from a sulphurous reputation due to its ties to Russia. In recent years, however, notably under the leadership of Jüris Ratas, the party has adopted a clearly pro-European and pro-Ukrainian line in recent months. “We don’t accuse Jüri Ratas of being pro-Russian, but the problem is that part of his Russian-speaking electorate is still very pro-Putin,” Mr. Saarts remarks.

“Some of their local leaders may have questioned what happened in Boutcha and may adopt Russian language elements, but that does not concern national leaders,” Pääbo said.

Kaja Kallas is now trying to save her job. With the temptation to call early elections to take advantage of its good results in the polls, without waiting for the next legislative elections in March 2023.