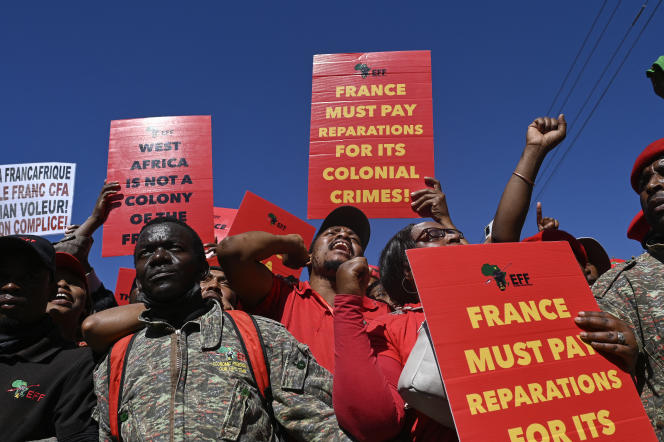 A few hundred supporters of the South African radical left demonstrated in Pretoria on Wednesday, May 25, for France, accused of postcolonial imperialism, to leave the African continent, AFP noted. In the colors of the party led by Julius Malema, the Fighters for Economic Freedom (EFF), red t-shirts and caps with a logo in the shape of Africa, held up signs “France outside”, “The wealth of France on the backs of Africans” or “Reparations for colonial crimes”.

The demonstrators landed in the morning in the South African capital on board buses chartered by the party and gathered a few streets from the French embassy, ​​noted an AFP team. “Fuck you France, fuck you!” “, chanted an activist on a stage set up on an open truck, the small crowd taking up the slogans in chorus, before approaching the gates of the embassy, ​​protected by a cordon of armed police.

“France has its dirty little fingers still deeply embedded in its former French colonies. African countries cannot breathe, EFF spokeswoman Leigh-Ann Mathys told AFP. It’s not just France, but France is there on the front line. Today, we are telling France to let Africa manage its affairs independently. The EFF will “always fight against the imperialism of the West”, argued another spokesperson, Sinawo Thambo: “The France-Africa relationship must change, African countries must be considered as partners and not only as raw material suppliers. »

The embassy said in a statement that “France is a strong partner of South Africa” ​​and that it “fully respects the integrity, sovereignty and independence of all African nations”. France and South Africa “work together” in many sectors. “We will continue to strengthen our ties and cooperation,” she promises.