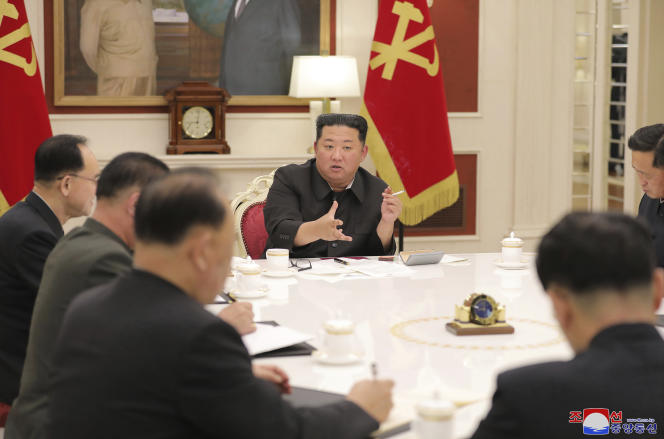 More than 1.7 million cases, and the anger of Kim Jong-un. Chairing a Party meeting on Tuesday, the North Korean leader said there was “a lack of maturity in the state’s ability to deal with the crisis” and criticized “the non-positive attitude, and the inactivity of senior state officials,” the official KCNA news agency said on Wednesday May 18.

North Korea recorded 232,880 new cases of “fever” on Tuesday evening, bringing the total toll to 1.72 million cases and 62 deaths, according to the same source. At the meeting on Tuesday, Kim Jong-un promised to “wake up the whole Party like an active volcano” to counter the spread of the virus.

Since the country announced its first case of Covid-19 last Thursday, the leader has taken personal action in the fight against the outbreak, which he says is causing “great upheaval” in the country. In particular, he ordered a national lockdown, his population not being vaccinated, and deployed the army to help fight the coronavirus.

The military “has urgently deployed its powerful forces to all pharmacies in Pyongyang city and started supplying drugs as part of a 24-hour service,” KCNA said.

The World Health Organization (WHO), however, expressed concern on Tuesday about the havoc Omicron can wreak on North Korea’s unvaccinated population, and reiterated its offer of assistance ranging from vaccines to medical equipment. For the time being, the Pyongyang authorities do not seem to have responded to these calls.

North Korea’s healthcare system was ranked 193rd out of 195 countries by a study by US Johns Hopkins University last year. The country’s hospitals are notoriously under-equipped, with few intensive care units. According to experts, the country has no treatment for Covid-19 and does not have the capacity to massively test its population.

French military convoy blocked in Niger: the causes of the death...