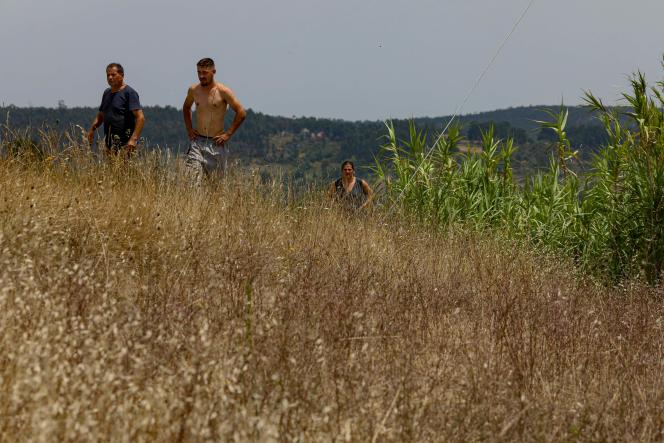 A month after a first heat wave, France is facing a new heat wave. An illustration of climate change that will cause “increasingly hot” summers, where 35°C will be the norm”, Météo-France reported on Wednesday, July 13.

According to the meteorological organization, the peak of this heat wave should be reached on Monday, with peaks expected between 40°C and 42°C in certain regions, particularly in the South-West, which is particularly affected. Some will also have no respite – the Toulouse region, for example, could experience “seven to ten consecutive days at over 35°C”.

The intensity of this heat wave – the second in a month – is already estimated to be “equivalent” to the deadly heat wave of August 2003, noted Matthieu Sorel, climatologist at Météo-France. On the other hand, its “severity”, a criterion which combines intensity and duration, will a priori be “lower”, since its duration is currently expected between eight and ten days, compared to two weeks in 2003. “The end of the episode is [however] not yet predictable”, warned Claire Chanal, forecaster at Météo-France, stressing that after the peak expected at the very beginning of the week “there will be a drop in temperatures, but not drastic, of a few degrees from Wednesday or Thursday.”

Seven departments in the Garonne valley and the lower Rhône valley have already been placed on heatwave orange vigilance on Wednesday:

On the Atlantic coast and in the Center East, twenty-seven departments have been placed on yellow alert:

The new Minister of Health, François Braun, announced on RTL, Wednesday morning, the reactivation of the free Heatwave info service number (0800-06-66-66) from 2 p.m. “We can give you all the necessary information about this peak heat wave and what to do,” insisted the Minister of Health.

Favored by the heatwave episode, two fires in progress since Tuesday afternoon in Gironde have already ravaged nearly 2,800 hectares of pines according to a report in the evening of the Minister of the Interior Gérald Darmanin, who came to La Teste-de- Buch, near the Dune du Pilat? “support” the firefighters, there the fire ravaged 1,250 hectares.

The most important fire has covered 1,550 hectares of pine forests near Landiras, about forty kilometers south of Bordeaux, leading to the evacuation of 250 people, according to the sub-prefect of Langon, Vincent Ferrier.

“We have two complicated fires”, with a “turning wind on the two sites which forces us to reassess the device all the time. In addition, at La Teste, it’s sand, it’s complex in terms of traffic, “explained the commander of the fire brigade, Matthieu Jomain, before summarizing:” We have long hours ahead of us. “Despite the intervention on the two sites of nearly a thousand firefighters, with reinforcements arriving from all over France in Gironde, “the two fires are progressing and are still not fixed”, declared, Wednesday evening, to Agence France-Presse, Commander Jomain.

For these two fires, “ten aerial means”, canadair and dash planes, were implemented during the day, “about half of what France has”, according to the prefect of Gironde, Fabienne Buccio.

Forensic investigations are underway to determine the origin of the two fires. If in Landiras it is for the time being undetermined, in La Teste-de-Buch, “it’s really an accident or a truck breakdown, a truck that caught fire in any case”, declared the prefect. “Nine fires out of 10 are of human origin”, either “involuntarily” (a poorly extinguished cigarette), or by “arsonists”, underlined during his visit Gérald Darmanin, urging “each and everyone to behave citizen “.

Cities are getting organized

In La Teste-de-Buch, 6,000 people who were staying in five campsites in the very touristic area of ​​Pilat had to be evacuated to the exhibition center where they spent the night from Tuesday to Wednesday on camp beds.

On site, in blazing heat and without the possibility of a shower, solidarity is organizing to help those displaced overnight, most of whom have left their belongings in their tents and caravans. For the town hall of La Teste de Buch, assisted by civil protection and the “solidarity” of neighboring municipalities, it is therefore a question of “finding solutions to accommodate people with local residents”. “Some offer a room, or their garden to pitch the tents,” explains Bruno Pastoureau, education assistant to the mayor of La Teste-de-Buch.

Faced with this heat wave, several cities are trying to organize themselves. Thus, Bordeaux will open six of its parks until 11 p.m., starting Wednesday, while the agglomeration of Niort will postpone the closing time of three of its swimming pools until Monday. In Ile-de-France, the police headquarters has decided to reduce speed on motorways and expressways due to an episode of ozone pollution scheduled for Wednesday.

The high risk of fire forced the city of Nîmes to give up firing its July 14 fireworks and bans on these events have multiplied in the South-East, mainly for individuals. Vigilance is the most severe in the Vaucluse, whose prefecture has announced the total closure of the forest massifs and the total ban on the firing of fireworks, until Sunday.