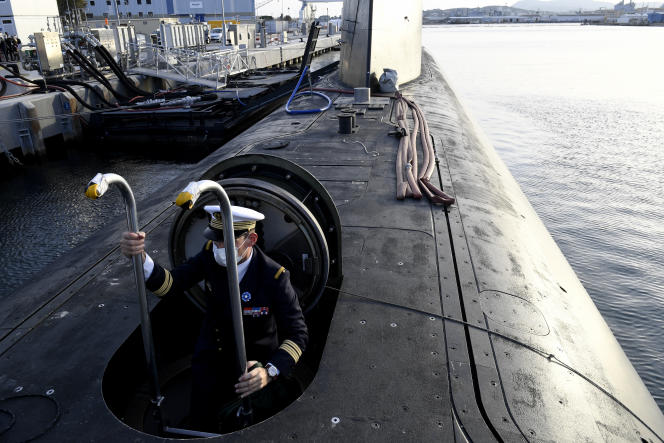 France officially entered into active service on Friday, June 3, in Brest (Finistère), its first new generation nuclear attack submarine (SNA). Called the Suffren, it is the first in a series of six SNAs intended to replace the Rubis-type submarines by 2030, in service since the 1980s. It allows France to make a real military leap in the field of anti-submarine warfare. For the occasion, the new Minister of the Armed Forces, Sébastien Lecornu, made the trip to Brest, where he benefited from an individual visit.

The entry into active service of a new submarine is always a highlight, but that of the Suffren takes on particular accents due to the Ukrainian conflict, while current tensions have pushed France to strengthen its nuclear deterrence posture. The Suffren is a monster of technology nearly 100 meters long, weighing 5,300 tons, and manufactured in Cherbourg (Manche) by Naval Group and TechnicAtome. Presented as faster, more discreet and able to sail longer, it is also more armed than its predecessors. It can carry up to 20 torpedoes and missiles—including anti-ship missiles—on board, twice the load carried by Rubies. The Suffren is also the first French submarine to be able to have cruise missiles, long-range missiles, capable of reaching, in its case, land infrastructures located 1,000 km away.

Also new is an “airlock” for combat swimmers. This small removable hangar makes it easier for swimmers to get out of the submarine and no longer have to go through the torpedo tube. In this airlock, swimmers can access a thruster which then makes it easier to reach a shore. A capacity that other countries like the United States or the United Kingdom have, but that France did not have. This equipment thus intended the Suffren to be able to carry out operations with the commandos that the crews of the Rubis class submarines could not afford.

An SNA like the Suffren can be as useful for intelligence operations as it is for demonstrations of power, as was the case in 2021, when another SNA was sent for seven months in the Indo-Pacific. The Suffren can also ensure the protection of buildings such as the Charles-de-Gaulle aircraft carrier or ballistic missile submarines (SNLE) carrying nuclear missiles. With the war in Ukraine, France, for the first time since the Euromissile crisis (1977-1987), increased to two – or even three, depending on the sources – the number of SSBNs permanently deployed at sea to ensure the French nuclear deterrent.

It is a submarine of this type that France hoped to sell to Australia, until the announcement, in November 2021, of the new Aukus alliance between Canberra, London and Washington. However, the contract signed with Australia did not provide for these twelve submarines to be nuclear-powered.

The Suffren is part of a program called Barracuda, which includes the manufacture of six SNAs in total and is estimated to cost €9.1 billion. The next submarine of this class should be delivered in the coming months. Completed in November 2020, the Suffren has since undergone numerous sea trials. Its entry into service was due to take place at the end of 2021, but technical problems led it to be postponed for a few months. Its arrival partially fills the capacity gap that the navy is currently experiencing: one of its other SNAs, the Pearl, suffered a fire in June 2020 and should not be operational before 2023.

“The arrival of Le Suffren is a significant event. It is the first of the Barracuda program, therefore of its class, and therefore of its generation. But the French submarine does not yet find its initial level with it, ”confirms Hugo Decis, researcher at the International Institute for Strategic Studies, based in London. “Given the performance of the Suffren, and despite its cost, the war in Ukraine could raise questions about the need for France to revise upwards the format of submarine forces within the framework of the future military programming law. “, adds this specialist in naval issues.

While international tensions continue to increase in the maritime field and many specialists consider that the seabed will be increasingly contested, many countries are embarking on the acquisition of submarines or renewing their fleet . Russia, currently engaged in Ukraine, is one of the most advanced countries in this area.