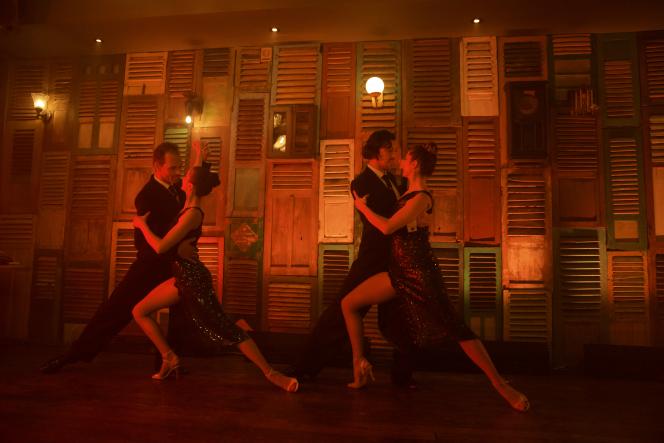 This immersion in the tango culture, mixed music and dance, is led by André Manoukian. He leads this film, written and directed by Nathan Benisty, introducing and commenting, not without enthusiasm, on the different sequences. From the evocation of Carlos Gardel (1890-1935) and his famous Volver, created in 1934, to that, long and rich, of Astor Piazzolla (1921-1992) – whose many hits irrigate the documentary -, this bias sets the original tone of this documented and educational escape, in this abundant world born on the banks of the Rio de la Plata, in Buenos Aires (Argentina), but also in Montevideo (Uruguay), at the end of the 19th century.

The chronological progression first recalls the varied origins of the word “tango”. It is the pen in which Africans waited before being sold into slavery, then becomes the party ground for slaves in Buenos Aires. But it is also said to be derived from the Spanish word “tambor” which means “drum”. But curiously, underlines Manoukian, there are no percussions in the traditional orchestras which pack a movement whose roots would be the Cuban habanera, but also the waltz and certain peasant dances of southern Europe.

The story is based on numerous archival images. In 1914, when the First World War broke out in Europe, the tango, danced between men by the thugs of Buenos Aires, in a city populated by immigrants where women made up only a quarter of the population, began to establish its codes. It becomes that intensely sophisticated and sexual pas de deux whose learning requires patience and meticulousness, as well as an impeccable talent for partnership.

The musical and choreographic illustrations that punctuate the film sometimes give pride of place to quirky gestures. That of the choreographer Maurice Béjart (1927-2007), who interpreted a tango in the 1970s, or that, more contemporary, of Bruno Bouché, director of the Ballet of the Opéra national du Rhin, underline the way in which the tango has spread in creations and repertoires of all styles. From jazz to electro, from variety to rock, Charles Trenet, Tino Rossi, Enrico Macias but also Bernard Lavilliers or Imany have slipped into his flexible and rowdy cadences.

Closer to a television program, moreover, Le Tango dans tous ses states is savored as a loving tribute to this culture, which has become intangible cultural heritage of humanity at Unesco since 2009, and whose fans are multiplying in the whole world. All the same, this program lacks a real “mouth of atmosphere”, that of the many milongas of Buenos Aires where dancers of all ages and countries find themselves shoulder to shoulder to get drunk on his wildly tangled steps.