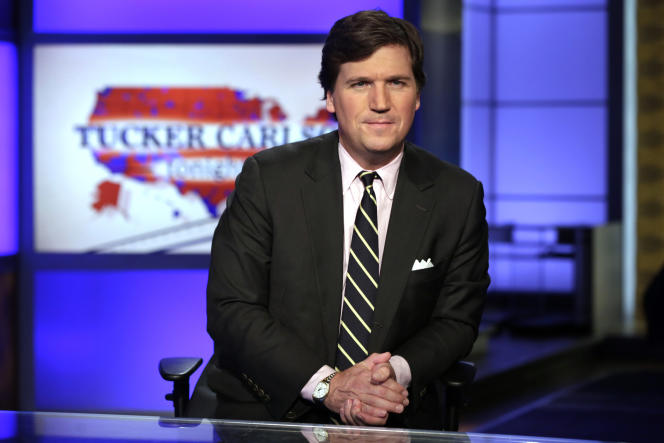 Hours after the attack that killed ten people and injured three in New York State, the words of the Erie County Sheriff were unambiguous: “This was clearly a racist hate crime . Eleven African-Americans are among the victims of the man who opened fire in a supermarket in the city of Buffalo on Saturday, May 14, while filming his act. American media have reported a racially charged “manifesto” that was circulated on the Internet and social media, as is often the case in crimes committed by white supremacists. According to the New York Times, this 180-page document referred to the conspiratorial and racist thesis of the “great replacement” of the white population.

A thesis whose defense and promotion are not limited to marginal Internet sites. As CNN reporter Jim Acosta recalled on Sunday, the “great replacement” theory finds a mouthpiece every weeknight in Tucker Carlson, the very conservative host of America’s most-watched talk show. United, aired on Fox News.

“What does [Mr. Carlson] peddling ‘replacement theory’ and other elements of white nationalist discourse is dangerous,” Jim Acosta spoke out live on CNN, accusing Fox News of “doing nothing about it.”

The New York Times recently delved into five years of “Tucker Carlson Tonight,” watched by more than three million viewers nationwide. The journalists of the American daily watched no less than 1,150 episodes. Based on an analysis of the words of presenter Tucker Carlson, the NYT shows how he “brings extremist ideas and conspiracy theories into millions of homes five nights a week”.

At the head of the talk show since 2016, the presenter, a fan of Trumpism, has taken a prominent place in it for a few years. He no longer hesitates, for example, to open the program with monologues of more than ten minutes, even twenty. Long talks without contradictions always exposing the same patterns and reasoning, according to the New York Times.

“Them and you”, “big replacement”…

His speech is structured around a supposed plot by the “ruling class” to “control the lives” of “normal people” and “censor” anyone who speaks out against its interests. In Mr. Carlson’s words, this translates into a recurring contrast between “they” and “you”, Fox News viewers, to whom the presenter directly addresses: “They hate you”, “They call you racists “, “They want to take away your weapons”, “They want you to shut up and obey”, “They care more about the Afghans than you”, “They don’t care about you”…

This dichotomy is “commonly used by populist or authoritarian leaders to create emotional bonds with their followers,” the NYT notes. Of the 1,150 episodes of the show analyzed, more than 800 mention this “ruling class”, and on an almost daily basis since 2020.

Behind this “they”, personalities from various backgrounds frequently criticized and attacked on the talk show. It includes Democratic politicians, such as President Joe Biden, Vice President Kamala Harris; bosses of big tech companies, like Jeff Bezos, boss of Amazon, or Bill Gates, founder of Microsoft, but also sports personalities, like basketball player LeBron James.

One of the “plans” of this “ruling class” would be the “great replacement” of the “native American” population, a recurring theme on Tucker Carlson’s show. The latter thus asserts, for example, to his viewers, that Democratic officials are “bringing in third world migrants” to “replace you with more obedient voters” in order to ensure that they “stay forever in power “.

The presenter also multiplies the warnings as to the consequence (even the ambition) of these policies which would end up “destroying Western civilization” and “your way of life”. According to the daily’s analysis, the presenter has relayed this idea dear to American white nationalists in more than four hundred episodes of “Tucker Carlson Tonight” since 2016.

Tucker Carlson also discusses in at least six hundred episodes, and increasingly since 2020, the existence of “anti-white racism” while downplaying discrimination against people of color. In particular, he repeated, on numerous occasions, that white nationalism and white supremacism did not exist.

As the NYT recalls, these positions earned him a tweet from David Duke, former Grand Wizard of the Ku Klux Klan, suggesting in 2020 that Donald Trump choose the Fox News presenter as his running mate for the presidential election. Andrew Anglin, the founder of the white nationalist website The Daily Stormer, also called Carlson “literally [their] best ally”.

According to the daily’s analysis, these subjects have occupied an increasing place in the program over the years. Tucker Carlson devoted five times more airtime to it in 2021 than in 2017. The radicalization of the comments made by the presenter of the show was accompanied by a scarcity of guests contradicting him on the set. The NYT has counted seven thousand non-channel guests since 2016, of which only one thousand defended positions opposed to those of Tucker Carlson. Since 2020, these can almost be counted on the fingers of both hands.