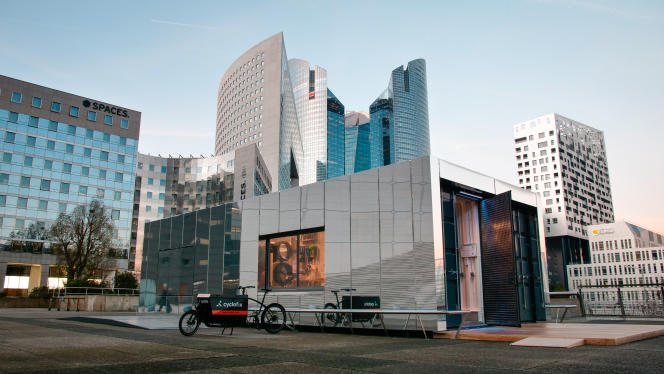 When choosing a date for the return of their bike, customers check their smartphone to ensure that they will be working “face-to-face” that day. Some, while a mechanic is changing a brake cable, start a “visio”. The La Défense bicycle repair shop, just behind the Grande Arche, lives with the habits and customs of the business district.

The workshop, operated by the Cyclofix platform, specializing in the repair of bicycles at home, took place in a large cube lined with mirrors, consisting of two containers glued to each other, which does not distract in this mineral universe of sparkling towers. Inside the 50 square meter room, everything is in its place: tools and spare parts stored in lockers, wheels and tires hung on the walls, a bicycle being repaired suspended by straps, a small computer placed on a established.

Customers follow one another at a regular pace, punctually at the appointment they have fixed online, after having briefly described the adjustments to be made. Despite this apparent tranquillity, the repairers are not idle. “We carry out around ten repairs a day, three thousand since the workshop opened in December 2020,” says the manager, Aurélien Dochler, who adds: “People find us nice. “A customer, who needs a new inner tube for the rear wheel of her scooter, has just found a resemblance to Leonardo DiCaprio (when he was young).

Contrary to popular belief, “you don’t see so many executives in suits,” said Morgan Dobrigna, one of the repairers. “Many employees take advantage of their morning commute to play sports, and change when they arrive,” he adds. Some CAC 40 companies make it a point of honor to equip their head office with changing rooms and showers.

The uniqueness of La Défense seeps into the pedals and brake pads. A sign of the high level of user income, just under half of repairs are to electric-assist models, which accounted for only a quarter of national bicycle sales in 2021. “The brakes on electric models wear out more because people drive faster. We advise them to operate the gears and not just the assist levels,” says Dochler.

The workshop is a good place to observe the recent evolution of the business district. When Cyclofix moved into its containers, France was emerging from confinement, restaurants remained closed, and teleworking remained the rule in the tertiary sector. The mechanics received mainly the inhabitants of the surroundings. For the past year, La Défense has come back to life, thanks to the gradual return to work in the towers, interrupted or accelerated over the seasons and depending on the waves and variations.

To mechanics, customers tell of the removal of gauges in canteens and their relief when they were allowed not to wear a mask in front of their computer. These daily considerations do not prevent bankers and other financiers, familiar with business plans, from questioning the economic model of the workshop. “A lot of them ask us if business is going well,” smiles his manager.

Let them be reassured. The workshop records a 40% increase in turnover for the first five months of 2022, compared to 2021. The enthusiasm for cycling is also perceptible on the business side, as explained by Philippe Morel, President and co-founder of Dynamic Workplace, an operator of workspaces (offices, premises, car parks): “At Vinci, we have fewer requests for parking spaces, but we are inundated with bicycles. We did not expect to have so many in the parking lot: on average two hundred at all times in winter. The success of Cyclofix bears witness to the rise of cycling in this district designed for and by the automobile, streaked with underground roads and a circular boulevard, directly connected to the motorway network.

For a long time, the bicycle was even banned from the forecourt. “In 1998, a cyclist who had his front wheel caught between two disjointed slabs had filed a complaint against the town hall of Courbevoie, which, to prevent possible lawsuits, had purely and simply banned cycling”, says Béchir Kechiche, resident of the commune and long-time activist of the association Better moving by bicycle (MDB).

After 2015, once the ban was lifted, cycling emerged as a pragmatic response to traffic jams and the vagaries of RER A, the busiest rail line in France, with 1.3 million passengers per day in 2019. A decisive step was taken in 2020 when a cycle path was created on the Neuilly bridge, the main service from Paris. “Communities had been passing the buck for a long time, and it was Elisabeth Borne, then Minister for Ecological Transition, who brought together all the authorities concerned and thus removed the obstacles,” recalls Mr. Kechiche.

Other developments followed, such as a track along the circular boulevard, even if Patricia Marché, also an activist at MDB, regrets that “the clubs do not play the game. They continue to offer their employees free parking, which who encourages them to come by car”. This does not prevent companies from offering their employees repair vouchers at Cyclofix, and from recording this operation in their social and environmental responsibility strategy.