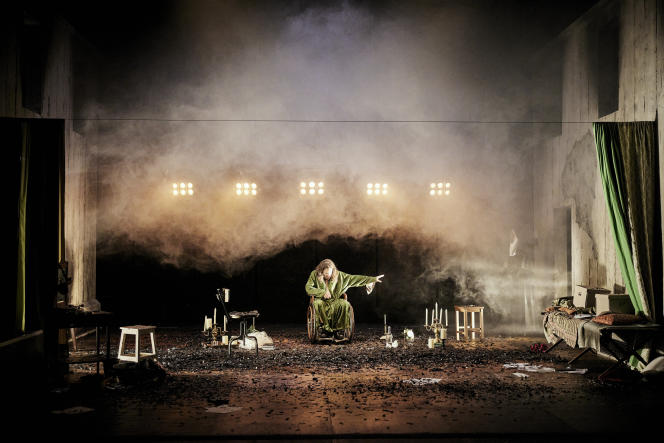 Molière, again and again at the Comédie-Française. Since January, the house has been celebrating its patron, born four hundred years ago. While, in the Salle Richelieu, one can still see, depending on the evening, L’Avare, Le Bourgeois gentilhomme or Les Fourberies de Scapin in delightful stagings, the Théâtre du Vieux-Colombier in Paris is embarking on other tracks. Louise Vignaud had the idea of ​​crossing and mirroring the life of Molière with that of the Russian writer Mikhail Bulgakov.

The idea of ​​the young director was beautiful. Firstly because Bulgakov was madly in love with our great national writer, on whom he wrote a brilliant Novel by Monsieur de Molière and a play, La Cabale des dévots (1929), where it is about the banning of Tartuffe . The juxtaposition of these two destinies was also an opportunity for a fascinating reflection on the relationship between writers and power – and, ultimately, on two forms of power: that, strictly concrete and temporal, exercised by politics and that which art and literature allow, the power of the imagination.

Initially, Louise Vignaud wanted to adapt Le Roman de monsieur de Molière, then, one thing leading to another, she wrote her own play, with four hands with her collaborator in dramaturgy, Alison Cosson, in order to be able to mix more intimately the lives of the two authors. It all began in Moscow in 1929. Mikhail Bulgakov was visited by Voroshilov, a member of the Politburo Commission, who came to inform him that his plays were banned and withdrawn from the poster. From there, a gap in time opens up and a fable intertwines the position of the Muscovite writer in Stalinist Russia, and that of the French author not only in relation to Louis XIV, but also in the face of a power formidable at the time, that of the Church.

The weaving of temporalities and stories is carried out with a certain fluidity and the show can be watched without displeasure, but the piece nevertheless remains very largely anecdotal. It’s a shame, because Louise Vignaud is a talented director. And this Twilight of the Monkeys shows it once again, with its shimmering and nocturnal atmospheres, its games with the theater of trestles, its obvious love for all the craftsmanship of the theater, its masks and its spells. The scenes that take place in Molière’s troupe are very successful, and there are even delightful moments in the show, such as the one where the young Géraldine Martineau plays Louis XIV.

The actors, on the whole, are great. Pierre Louis-Calixte, one of the troupe’s most singular and secretive actors, espouses Bulgakov’s despair with beautiful lyricism. Thierry Hancisse is as irresistible as Catherine de Rambouillet as he is as a Stalinist theater director or as a crooked and implacable archbishop. Coraly Zahonero, always fine and charming. But it’s more complicated for Nicolas Chupin, who has just joined the troupe and finds himself playing nothing less than Molière himself. This actor, always excellent in Pauline Bureau’s shows, finds himself here playing a little too forcefully, perhaps in an attempt to breathe life into a text that lacks it. It is not Molière or Bulgakov who wants…