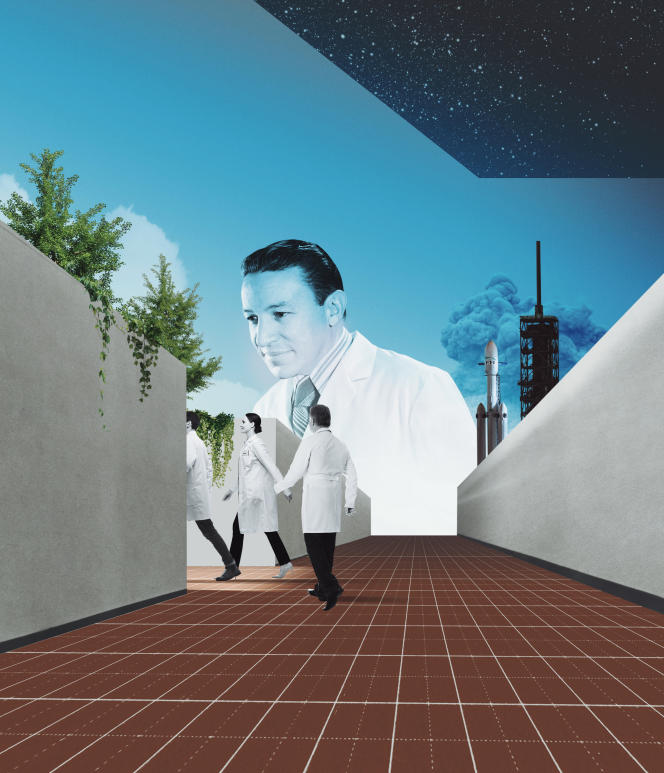 What’s going on in research labs? Wind of rebellion, desertion, transition, bifurcation, even career reorientation…? What words can be used to describe this trend that tomorrow’s scientific research may not be the same as yesterday’s?

Indeed, more and more researchers are deciding to modify their way of working, or even to change the subject of their study, to get out of the inertia in the face of global warming, to maintain consistency between their values ​​and their practices, or simply to “make humanity possible tomorrow”, as summarized by Jean-Michel Hupé, one of these “bifurcators”.

At the end of 2020, this CNRS researcher left his Toulouse neuroscience laboratory for another team, in the humanities and social sciences. Finished the study of synesthesia or vision, place to a work in political ecology. “I became more and more uncomfortable with the idea of ​​seeing that nothing was happening, while the climatologists were making clear observations about the climatic situation,” he recalls.

Before taking the plunge, he had co-created, at the end of 2018, in Toulouse, Atécopol (the Political Ecology Workshop), a collective intended to “share knowledge and make it effective in the face of ecological devastation”, specifies Jean-Michel Hupé . Among its members, the reorientations are numerous. Julian Carrey, professor at the National Institute of Applied Sciences (INSA) in Toulouse, specialist in nanotechnology, who joined the collective at its beginnings, now studies low-tech and, in particular, solar steelmaking: “I takes a gradual step aside, wondering what a sustainable society would look like over several millennia. »

“Change of relationship to the world”

Another “atecopolian”, Florian Simatos, in applied mathematics at ISAE, abandoned the modeling of communication networks, to take an interest in the environmental footprint of the aviation sector, a subject which he considers “more useful “. In the same group, Hervé Philippe, biologist in CNRS population genetics at the Theoretical and Experimental Ecology Station in Moulis (Ariège), tracked the origin of living things, before changing to understand the adaptation of organisms to environmental stress.

Vincent Gerbaud, CNRS researcher at the Chemical Engineering Laboratory in Toulouse, has stopped modeling synthesis processes for research closer to his fellow citizens, such as land use planning or decision-making. “I spent years optimizing costs. It was stupid and it makes me laugh today. By changing my research objects, I changed my relationship to the world,” he says.

In the INSA classroom, where Le Monde collected their testimonies, the importance of this original collective transpires. “Atecopol is precious so that we are not alone in our corner thinking about these questions. It’s intellectually stimulating,” appreciates Vincent Gerbaud.

These approximately 160 members of Toulouse are far from being the only ones to question themselves and to take the step of the transition. A collective work, Intimate Encounters with the Anthropocene (Savoir et s’émovoir edition), produced by these different groups, published in January, lists some twenty testimonies, sometimes moving, of awareness and commitment to research more consistent with the defense of the environment. One cries at the edge of a lake, thinking of the disappearance of a civilization. Another cracks up when she realizes that global warming in Africa is pushing people to sleep outside, and therefore to no longer protect themselves with an anti-malaria mosquito net.

In France, however, no one, to our knowledge, has gone as far as Mauricio Misquero, a Spanish postdoc funded by the European Union, who in January said he was “disobeying” by refusing to work on his related project. space, because it was “more part of the problem than the solution”.

The movement, which also resonates with recent positions taken by students, at AgroParisTech or ENS de Paris, who refuse to serve a system that is harmful to the planet, is growing. The Atécopol has made small in Montpellier, Paris, Dijon, Grenoble, Marseille… In Lyon, a close movement, La Fabrique des questions simples, will co-organize a conference at the end of August with this title in line with the questions of other collectives: “Fork, resist, desert? »

In 2019, a major initiative was also born, Labs 1point5, to “demonstrate that a transition is possible. And that research can apply to itself, collectively, the desirable transformations for society”, according to Tamara Ben Ari, one of the co-founders, researcher at Inrae, at the Institute of Ecology and Life Sciences. environment (Paris). More than 450 laboratories have entered into the process, more than 500 researchers belong to various think tanks and action groups.

The activity of all these militants is overflowing. Labos 1point5 is committed to producing greenhouse gas (GHG) assessments and supporting labs in the transition. Sub-groups reflect on education and training. Another, we do not repeat, studies these transitions: effectiveness of the different tools? how to mobilize a community? effect on quality of work life after a transition? Another thinks about indicators of research quality, or about art and science links… The goal is to transform research from the inside.

Atécopol and its offshoots are more directly oriented towards society, with critical forums (aeronautics, carbon offsetting), books (on “greenwashing” or 5G), conferences, demonstrations…

From this effervescence emerges a vision of science and research that may seem far removed from the canons defended by those who are at the head of it. Olivier Ragueneau, from the Laboratory of Marine Environmental Sciences, in Brest, during a symposium of Labs 1point5 on June 1, in Paris, defended a sustainable, sustainable science, more qualitative than quantitative, even slower. “Utopia is to think that our current system is tenable and desirable. On the contrary, it is not utopian to dream of a more collective, creative, interdisciplinary research. »

Her colleague Tamara Ben Ari insists on “cooperation rather than competition” and wants to “give power to the community”, through GHG assessment tools, in order to “allow the reappropriation of [her] professions” by this community, to its practices and orientations. In Toulouse, Julian Carrey is engaged with Sébastien Lachaize, also a teacher-researcher at INSA, in research on low-tech, on their definitions, but above all on how to make them “sustainable, fair and user-friendly”.

Over the shoulders of these committed researchers hangs the shadow of one of their predecessors, the mathematician Alexandre Grothendieck (1928-2014). He too had “bifurcated” in 1970, leaving the prestigious Institute for Higher Scientific Studies and honors (Fields Medal in 1966) to lead an ecological crusade, encouraging reflection on the future of the planet and research. At the time, the peril that worried him was more nuclear escalation than global warming, but the questions still resonate today, reading the recent publication of one of his most famous lectures: “Are we going continue scientific research? (Editions du Sandre, 104 p., 9 euros).

One thing in common with today’s “forks” is method. Alexandre Grothendieck reminded his audience that from now on, each time he went for invitations, he asked to open a debate on science with his colleagues and students. “We’ve hacked a lot of lectures and courses too, to invite students to think about these questions! “, say several of the members of Atécopol.

This “hacking” ended up paying off, as their school or university modified the curriculum to include these reflective and forward-looking dimensions. “Students come to our classes, so that’s a good sign,” says Julian Carrey. During our conference-debates, colleagues take blows on the head, but are not hostile. Even though, in the corridors, some tell them that they have “gone wrong”.

For the moment, this germ of radicalism does not frighten employers. The CNRS, Inrae and Ademe, for example, support Labos 1point5 with the creation of a Research Group (GDR) bearing the same name, in parallel with the collective which remains autonomous, which allows any member of public research to declare working time for this somewhat peripheral activity.

Jean-Michel Hupé, of the CNRS, did not encounter any problems in his acrobatic mobility from the natural sciences to the human sciences. Sébastien Lachaize, another member of Atécopol, insists: “We are lucky to have systems such as part-time work, which free up time to think, experiment, test. Let’s take advantage of it. »

“People need to be given the opportunity to devote as much time as they want to this issue, including in the context of their profession, and regardless of their status. The GDR Labs 1point5 allows exactly that. It’s a collective political victory,” recalls Olivier Berné, astrophysicist at the Institute for Research in Astrophysics and Planetology, co-founder of Labs 1point5. In contrast, the “disobedient” Mauricio Misquero was fired in April.

Nevertheless, the climate could change, when the efforts required get closer to the core business. “A thing that is not discovered cannot have bad uses”, recalls Hervé Philippe, who thus poses the delicate question of whether or not to continue certain research. “It must be recognized that certain activities are harmful to the habitability of the planet and that technology will not save our ways of life. Increasing knowledge necessarily means more energy and more material expended: the question of fundamental research in a shrinking world and within a sustainable society is therefore particularly delicate”, specifies Julian Carrey.

Jean-Michel Hupé, adding that “the sciences are also partly responsible for the current catastrophe”, pleads with his colleague for open debates between scientists and citizens to discuss the orientations of research. “We have to identify what we care about and devote energy, resources and human means to it. This requires putting in the same balance things as different as beef steaks, a new telescope, superyachts, a cancer research program, a music festival… It’s not up to scientists to answer such questions delicate, but this requires citizen debates informed by scientists and to get clear on our common values, “adds Julian Carrey. The bifurcations promise to be lively.