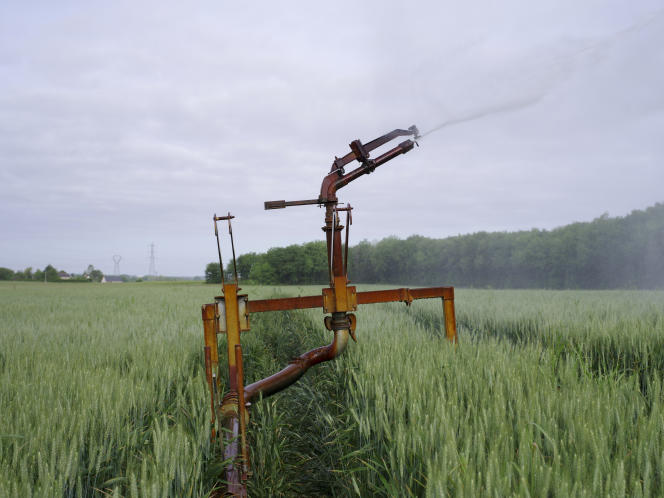 About twenty kilometers south of Angers (Maine-et-Loire), along the departmental road which sinks into the lands of Anjou, the blades of grass on the edges of the road are short. Not that they’ve been mowed recently, but the spring sun has already scorched a lot of them. The wheat of Denis Asseray, a 57-year-old farmer from Angevin, is having just as much trouble prospering.

At the very end of a sand and gravel path, the Domaine de La Bruyère, located in the commune of Gennes-Val-de-Loire, extends over 220 hectares of vines and cereals – from wheat and corn to equal parts. In the shade of the barn housing about fifty dairy cows, an imposing blue reel, at the end of which a cannon throws water in a fine rain, ends its watering tour.

“It’s the first year that I’ve been watering my wheat,” explains the farmer, who has been there since 1990. The ears are still short, barely formed, and some are already turning white, a sign of intense drought. Further on, squares of land are even so dry that they are “already blue”. Located at the edge of the plot or on non-irrigable parts of land, not all benefit from artificial watering. “Here, the grain is not even fertilized,” explains the farmer, crumbling a whitish ear. The current lack of water is all the more problematic as the development of wheat reaches, at this time of year, its crucial phase of grain growth, which requires a significant water supply.

Since the beginning of January, just under 135 millimeters of precipitation have been recorded across the department, against an average of 250 millimeters. And since the beginning of April, less than 45 millimeters, instead of 80, according to figures from Météo-France. The high temperatures of recent days, occasionally flirting with 25°C, have not helped. In mid-May, the drought reached Maine-et-Loire, like what is happening in part of France.

“Water all you can”

Denis Asseray does not “remember[t] a spring so dry so early”. The period from January to April is indeed the driest recorded in the department since 1991, confirms Lionel Salvayre, territorial referent of Météo-France in the Pays de la Loire region. In previous years, these heat waves only occurred in the department just before summer, at the end of May or the beginning of June.

Some five kilometers further west, in Brissac-Loire-Aubance, the crops of Thierry Chaillou, 56, are also suffering. At the heart of his 460-hectare farm, the earth from his corn plots slips through his fingers like sand. But the situation is less problematic than for wheat, he explains, because the maize has just been sown and still has enough time to catch up with its water shortage.

The very young seeds, sown the day before, however, need water immediately. With no rainfall forecast, it’s a watering system that will bring them precious millimeters of water, between late morning and middle of the night. In addition to corn, Thierry Chaillou wants to “water everything that [he] can”. So, every day for a week, he moves his five machines around 4 a.m., sometimes 3:30 a.m., to try to irrigate as much of it as possible.

The challenge of water management

The two farmers, however, know they are lucky. For those who do not water, “it’s the cata”, they assure. In Maine-et-Loire, only a third of farmers irrigate their plots. For the moment, Thierry Chaillou and Denis Asseray are not yet limited in their use of water, which they will draw from deep groundwater through drilling.

But the level of these underground waters is approaching the alert threshold and could cross it soon, for lack of rain. At the level of the department, four sectors are already on alert level for groundwater, which leads to the ban on irrigation between 10 and 20 hours.

The two farmers are therefore trying to save the resource. Planted for several years in the middle of Denis Asseray’s wheat, a handle surmounted by a white box contrasts with the green of the ears. Thanks to this probe, the irrigation status of the crop is drawn in blue, green and red on the screen of his smartphone. By crossing soil composition and moisture data with the type of crop and its stage of development, the curve indicates when to water and how much.

Hope “for a storm tail”, Sunday

At the Maine-et-Loire Chamber of Agriculture, Alexandre Chaigneau, water and environment consultant, believes that it is at the cost of this search for individual efficiency, combined with collective actions in irrigation management, that the agriculture will be able to adapt to climate change.

Farmers are also experimenting with other avenues. Thierry Chaillou, for example, has reintroduced livestock on his plots to take advantage of animal waste, which nourishes the soil, and neighbors have increased their production of sunflowers this year, which require less water and whose price has exploded due to the war in Ukraine. But “for reasons of profitability, know-how and terroir, sometimes changing crops for others less water-intensive seems, for the moment, difficult to achieve” in the department, judge Alexandre Chaigneau.

Two months before the wheat is harvested, in July, the two farmers know that they will experience a loss of yield this year. Irrigation should however “save the furniture, reassures Thierry Chaillou. It acts as a guarantee.” His gaze, however, lifts to the milky midday sky, seeming to beg for mercy and “just a tail storm.” Sunday, Météo-France predicts thunderstorms in the department.