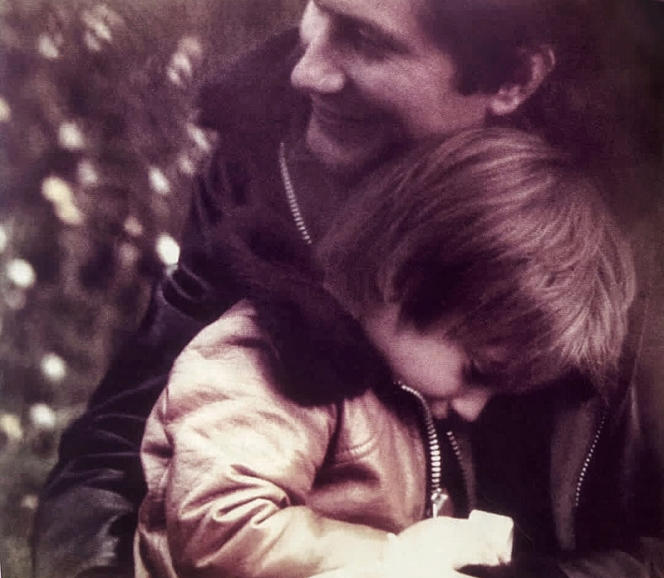 “My mom took this picture of me and my dad as a kid. She always took pictures of us, with a telephoto lens, close up, and filled very beautiful albums, which she still has today. This shot was surely taken in the garden of the house, in Paris, that my parents once had. My father holds me tenderly in his arms. It touches me to see him so sweet. Even though he was very loving and very affectionate, it was not like him to be like that. He was more of the style to do everything to make me laugh.

My mother and my maternal grandmother, who was very present, were stricter, gave me a framework, he was lighter. I remember one day, when I was 5 or 6 years old, when, like that, he gave me a “Pascal”, a 500 franc note. I rushed to go with him to the toy store to buy a pirate ship. When he got home, he got really yelled at. He impressed me, because I felt he was not like other fathers. He already loved gadgets. In his car, a kind of huge 4 × 4, he had a drink machine. It was crazy.

Little twink from father to son

A while ago, when we started singing together, I found myself in his car, a big van. And then, one evening, he started operating a remote control to lower the curtain between the front and back seats. He was quite happy, and so was I, like when he showed me the coffee that fell into the cups in his car. I was a kid again. This little guy who, in the photo, wears a leather jacket, like his dad.

I have a vague memory of this jacket, which is very pretty. Later, I was decked out in impossible clothes, fluorescent anoraks… It took until adolescence for me to find worthy clothes again. And I was going to steal from his closet. I remember stuffing him with a biker wallet with a skull on it that said, “Live to ride, ride to live.” I walked around with a comb, leather shoes, a Harrington jacket. A real little twink… On this point, as on so many others, he was a real model. »