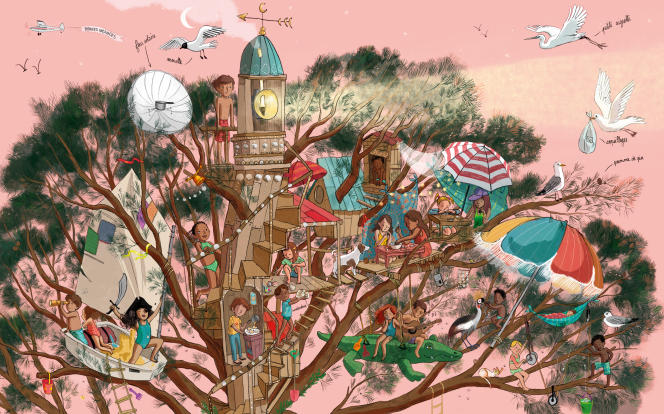 > Shelters from all countries

It’s not a book, it’s a vote! Taking as a pretext the journey of a migratory bird, The Cabin Competition presents seven shacks made by children in various places around the world. On abundant double pages, almost as complete as plates of Where’s Waldo?, we discover the ingenious installations produced by children to transform trees into a community space for play and relaxation. In the hut of the camphor tree, in Japan, we read books surrounded by tanuki, we sleep on futons suspended from the branches. In the shelter of the cypresses of the Mexican swamps, we indulge in scuba diving, we slide down a toboggan, we sneak between the leaves with the tamanduas. At the end of the album, the reader is invited to vote by email or by post for the creation he prefers; he will receive a poster for his participation and the chosen hut will serve as an illustration for an upcoming puzzle. To the polls!

Why does man, or rather child, build cabins? To project oneself elsewhere, this album reminds those who have forgotten the strong dreamlike power of temporary habitats built in the middle of nature. The smallness of the place proving conducive to escape, nothing is enough to find yourself aboard a helicopter in the middle of a storm or a palace populated by princes and princesses devoured by jealousy. A few snowflakes, and here is the shack transformed into an igloo; a few rays of sunshine, and the surrounding forest immediately becomes African savannah. Alternately theater, haunted house and scientific laboratory, the cabin acts as a space-time vessel carried by the inexhaustible winds of the imagination. The ocher foliage of the illustrator Alfred, also a cartoonist, captivates this poetic journey aboard a high-perched hut with nostalgia.

The do-it-yourself child accustomed to building huts will not be surprised by this book cut out in the shape of a teepee. Accompanied by a duck, a boy and a girl come and go there to build the structure based on dead wood branches, but also to engage in various activities related to the environment: making a fire using magnifying glass, making bows, building a bird sanctuary, blowing a musical horn… Sleeping there at night? No, of course not, except to be surprised by the exhaustion of busy days in the open air. Harmless wild animals then come to share the bed of the careless minots. When the holidays are over, it’s time to dismantle the makeshift shelter and let nature take over. No text accompanies this little forest immersion, a silent hymn to disconnection.

In the United States, supporters of increased gun control call on Congress to act

In New York, the MoMA brings together all the works present in Matisse’s “Red Workshop”

Prince Charles and Princess Anne at the Queen’s Jubilee, maybe that’s a detail for you…

In Ukraine, the hundred days of war of the orphans of Mariupol

The state of natural disaster recognized after the passage of violent...

News Editor - June 12, 2022 0
The state of natural disaster has been recognized for several municipalities which suffered damage linked to floods and mudslides during bad weather in early...

In the United States, supporters of increased gun control call on...

In New York, the MoMA brings together all the works present...