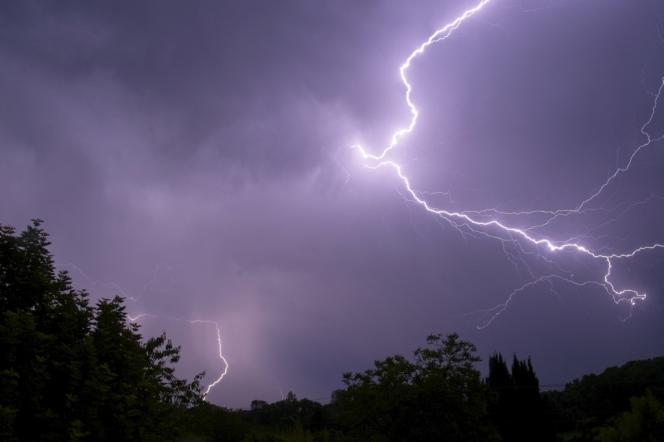 In 2022, France experienced a record number of lightning strikes for the month of June: from June 1 to 30, 206,257 cloud-to-ground lightning strikes were detected by Météorage, a subsidiary of Météo-France specializing in observation and monitoring. analysis of storm phenomena. An unprecedented level that beats all the figures recorded for the months of June since the installation and commissioning of the national network in 1989.

Classically, thunderstorms in France form when a mass of warm air coming from the south meets a mass of cold air coming from the Atlantic. These air mass conflicts favor violent phenomena and occur particularly in the southern half of the country, following a slight diagonal from the South-West to the North-East, approximately from Bordeaux to Strasbourg, as shown in the map below. below on the number of cloud-to-ground lightning strikes per square kilometer in France in June.

“These air mass conflicts can cause very large-scale situations, explains Stéphane Schmitt, expert with Météorage. In June, the mass of warm air was such that the cold air had difficulty moving it, hence the formation of instabilities. The high temperatures in June therefore directly contributed to the formation of more storm cells, but while this is a sine qua non, it is not sufficient to cause thunderstorms to form. “The spark is the humidity carried by the Atlantic, with that we have all the ingredients”, specifies the specialist.

Indeed, this one favors the formation of cumulonimbus, the clouds carrying storms. When a mass of warm, humid air close to the ground meets a mass of cold air, it rises, surrounded by cold air, which creates instability. At the same time, electrical activity develops within the cloud. “When two particles of icy water of different temperature come into contact and separate, they become electrically charged, whereas originally they are neutral, explains Serge Soula, physicist at the aerology laboratory of the University of Toulouse -III-Paul-Sabatier. There are thus zones which become positively charged at the top of the cloud and negatively charged at the heart of the cloud, which causes the discharges. The vast majority of lightning occurs inside clouds, but some strike the ground and can pose a hazard to people and property.

“There are very few memorable lightning-related accidents, but the damage can be enormous,” explains Stéphane Schmitt. They can generate voltage jumps, overvoltages, power supply problems. They have already caused the shutdown of a nuclear reactor in Switzerland, or the derailment of a train in Belgium. They are also the cause of forest fires, as in the Landes.

There are also several thousand animals that die of lightning every year, including cattle. In terms of human toll, there are on average a little less than ten deaths by lightning per year, according to data from the epidemiology center on the medical causes of death cited in an article published in February in the journal La Météorologie. Led by Stéphane Schmitt and Michaël Kreitz, analyst at Météo-France, this work on ten years of lightning accidents in Europe makes it possible to better understand the circumstances of such accidents, and sometimes to dispel certain received ideas. The investigation, which covers 215 lightning strikes that caused 83 deaths and 971 injuries, shows that 19% of the victims were at their place of work at the time of the lightning strike, more than the 13% who were hiking. These accidents involve a wide variety of outdoor activities, from hiking to swimming, including sports, but also two-wheeled transport, or even certain professional activities (farmers, garbage collectors and construction workers are particularly exposed ).

Another remarkable observation: the victims were mostly struck down while the level of vigilance communicated by Météo-France was “yellow” (82%). Storms under orange vigilance represent only 18% of victims. Indeed, 64% of the victims died during storms of low to moderate intensity, probably by underestimating the risk incurred. Analysis of Météorage readings even suggests that almost half of the thunderstorms that caused lightning strikes formed more than an hour before the accidents studied, and that more than 90% of them were detected more than fifteen minutes. before.