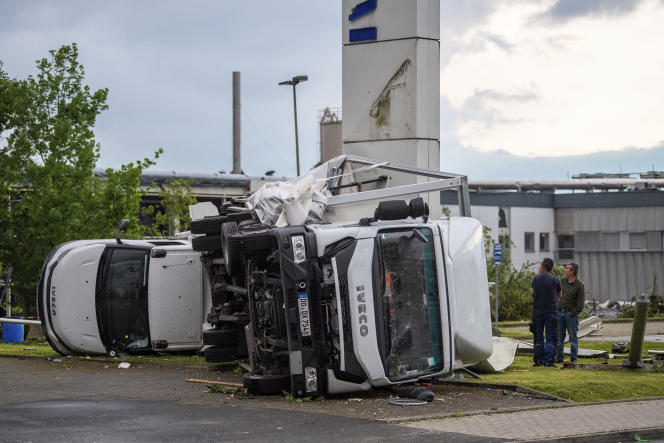 A tornado injured nearly 40 people, “ten seriously”, and caused “tremendous damage” as it crossed the center of Paderborn, a city in western Germany, on Friday (May 20), local police said. “Thirty-eight injured, some seriously, were taken to hospital,” city firefighters tweeted. One person “is in mortal danger,” local police said.

This rare and localized phenomenon hit this average city in North Rhine-Westphalia at the end of the afternoon, when bad weather affected the whole country after several days of abnormally high temperatures for the season.

In Paderborn, the police estimated at “several million” euros the “devastation” caused by the storm which mobilized more than 350 intervention forces. The column of the tornado progressing towards the dwellings, carrying away trees and sections of building, was visible on several photos posted on social networks.

The town of Lippstadt, about thirty kilometers away, was also probably hit by a tornado, according to a spokesperson for the fire department, without any injuries being to be deplored at this stage. The steeple of the church in this city was swept away by the violence of the gusts of wind, according to photos published on social networks. The spokesperson reported “roofs ripped off, windows shattered and numerous trees torn down throughout the city.”

In Rhineland-Palatinate, hailstorms five centimeters in diameter were also reported, “seriously damaging several dozen vehicles whose windows were shattered while driving”, indicates the Koblenz police. A 38-year-old man died after suffering an electric shock when entering a flooded basement due to bad weather, and falling on his head, Koblenz police announced at the same time.

This region, along with North Rhine-Westphalia, had already been badly affected last July by torrential rains which had caused flooding and claimed the lives of more than 180 people. Rail traffic on high-speed trains has been severely disrupted in the west, and police have called on residents to stay at home.

To the south, in Nuremberg, Bavaria, regional traffic was also disrupted due to fallen trees on the railway tracks, Deutsche Bahn said. The German meteorological services had issued a storm warning for the day on Friday, with gusts of winds that could reach up to 130 km / h in places.

The bad weather, which first affected the west of the country, moved east in the evening. The violence of the storm is linked to the arrival in Germany of particularly hot air from Spain and France, on the one hand, and cold air from the north on the other, explained meteorologist Özden Terli on public television ZDF, who spoke of an “explosive mix”.

In mainland France, the average temperature exceeded daily seasonal norms for 38 days on Wednesday, equaling a record of April-May 2007, according to the meteorological services. In Germany, the bar of 30 degrees, sometimes more, was reached on Thursday in several municipalities in the west and south of the country.