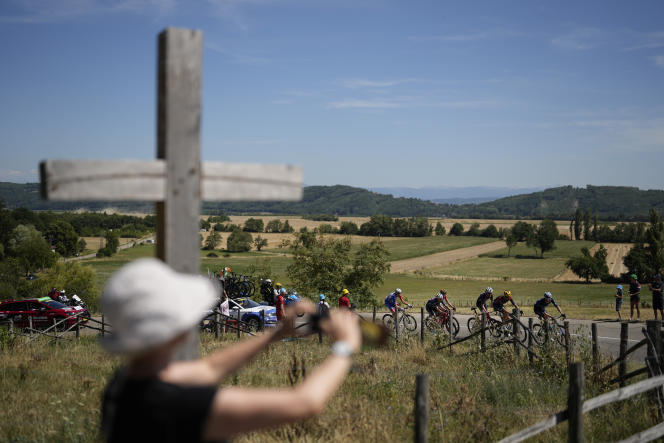 With a small wave of his hand, Matteo Jorgensen asks his team car for a can. The “can hunt” is in full swing. The American is part of the breakaway of seven tough guys who left after an hour-long showdown with the peloton, from Le Bourg-d’Oisans (Isère), the starting town of a 13th stage terminating in Saint-Etienne (Loire).

The following scene will escape television: one of the vehicles of the Spanish formation dismounts from the right, places itself in the middle of the two-lane, to go up to its rider, while the motorcycles which circulate on the side left of the road zigzag to let her pass.

To untrained eyes, the undertaking seems a bit perilous, with its chain of honking, braking and swerving. In total, more than 160 vehicles – motorbikes and cars from the organisation, the media, the gendarmerie… – roam the race roads every day. And, beyond the apparent chaos and a level of stress worthy of the Paris ring road, the mechanics are actually well oiled.

One of the secret ballets of the Tour gets into action

Take this Friday, whose route, without great difficulty after the alpine diptych, promised a battle between adventurers. The scenario is classic, and several of the twenty-two teams have chosen to place one of their support vehicles along the route: easier to access the breakaway without having to go all the way up the peloton.

From the real start, at 1:20 p.m., the attacks fuse, but the breakaway of the day is slow to emerge. The three “information” motorcycles, responsible for reporting on the various race facts and calculating the differences, multiplied the announcements. “We are the eyes of the event”, sums up one of its pilots, Bruno Thibout, a former runner at Castorama and Motorola in the 1990s.

The gap between the leading men and the peloton reached the fateful threshold of one minute. From there, one of the secret ballets of the Tour kicks into action. The field is finally sufficient for the motorcycles of journalists and photographers, the cars of the sporting directors (one of whose protégés is in the breakaway) or even those of the marshals to fit in without risking disturbing the riders.

But beware, things are not done just any old way, and each vehicle must respect a specific place. That of the teams in the procession, for example, depends on the position of its first rider in the general classification: the team with the yellow jersey will be number 1; that of his dolphin, number 2; And so on. The red vehicles of the marshals watch over the grain, we sometimes hear a few calls to order: “Bahrain Victorious, in the back!” »

It is also an opportunity to take advantage of the public of the Tour – whose mania for putting on warm suits in the heat of the heat wave – or to cross at the bend of a bend, along the 193 kilometers leading to Saint-Etienne, Didi Senft, the “Devil” of the Tour.

The whistles of the gendarmes with yellow flags signaling the dangers on the route, like a median, alleviate the torpor of this Friday. A few minutes later, the boss of the Tour, Christian Prudhomme, gives voice on Radio Tour to remind everyone to hydrate.

Suddenly, the motorcycles accelerate then overtake the riders, to park on the side of the road a few kilometers further. “When the gap drops below one minute, you have to clear the front as quickly as possible”, explains Aurélien, one of the drivers whom Amaury Sport Organization (ASO), the manager of the event, advises. available to journalists and photographers.

False alarm. Business can resume. The all-yellow bike from the slate slate of the Grande Boucle continues its back and forth between the race leader and the peloton. The gap has stabilized: at less than 30 kilometers, we guess that the winner is one of the seven in front.

11 kilometers from the white line, the Dane Mads Pedersen accelerates and takes a few lengths ahead, quickly joined by the Briton Fred Wright and the Canadian Hugo Houle.

The following scene, this time, the spectators of the Tour will have attended. Not the followers of the breakaways, for lack of a sufficient gap. 200 meters from the finish, all this foreign ballet is forced to leave the course and learns from Radio Tour of the victory of “171, Mads Pedersen, Trek-Segafredo”.