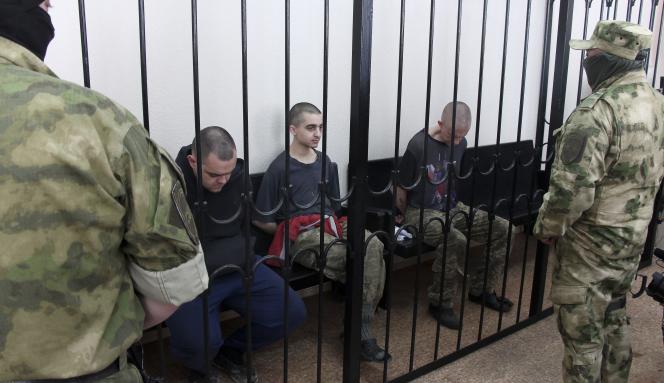 Two Britons and a Moroccan taken prisoner in Ukraine, where they were fighting for kyiv, were sentenced to death on Thursday, June 9, for mercenary action by the justice of the separatist authorities in Donetsk, Russian news agencies announced.

The three defendants, Aiden Aslin, Shaun Pinner and Brahim Saadoun, will “appeal”, the lawyer for one of the three men, Pavel Kossovan, told the official Russian news agency TASS. According to TASS, Shaun Pinner and Brahim Saadoun had pleaded not guilty on Wednesday to the charges of “mercenarism” but admitted their participation in the fights “aimed at the violent seizure of power”.

The United Kingdom said Thursday that it was “very concerned” following the announcement. “We reiterate that prisoners of war should not be exploited for political reasons,” said a spokesman for British Prime Minister Boris Johnson.

“Under the Geneva Convention, prisoners of war enjoy combat immunity and should not be prosecuted for their participation in hostilities,” Downing Street said.

I strongly condemn the sentencing of Aiden Aslin and Shaun Pinner held by Russian proxies in eastern Ukraine. They are prisoners of war. This is a sham judgment without any legitimacy.

“Neither a volunteer nor a mercenary”

Aiden Aslin’s family explained at the end of April that he had moved to Ukraine in 2018, where he met his girlfriend and finally settled in Mykolaiv. He had decided to join the Ukrainian marines and served in this unit for almost four years.

“He is not, contrary to Kremlin propaganda, a volunteer, a mercenary or a spy. Aiden was planning for his future outside the army, but like all Ukrainians, his life was turned upside down by Putin’s barbaric invasion,” according to his family.

Shaun Pinner’s family also explained that he was “neither a volunteer nor a mercenary, but officially serves in the Ukrainian army in accordance with Ukrainian law”. He also moved to Ukraine in 2018, and married a Ukrainian.

Pro-Russian officials had hinted in recent weeks that captured Ukrainian soldiers, including those from the nationalist Azov regiment, could face trial and the death penalty.

A moratorium on the death penalty has been in force in Russia since 1997, but this is not the case in the two separatist territories in eastern Ukraine.

On Wednesday, the International Legion for the Defense of Ukraine (LIDU), the official organization of foreign volunteer fighters, denounced the trial of one of its members captured by the separatists, Andrew Hill. According to this organization, which brings together foreign volunteers fighting with Ukraine, Andrew Hill is a “legionnaire who has a contract with the Ukrainian army” and not a mercenary.

The three men sentenced to death were not clearly presented as members of the International Legion in Defense of Ukraine.

Four foreign volunteer soldiers, including a Frenchman, were killed fighting the Russian invasion in Ukraine, the LIDU also announced. Russia, for its part, claimed this week to have killed “hundreds” of foreign fighters in Ukraine since the start of its offensive on February 24, and thus succeeded in stemming the flow of new arrivals.