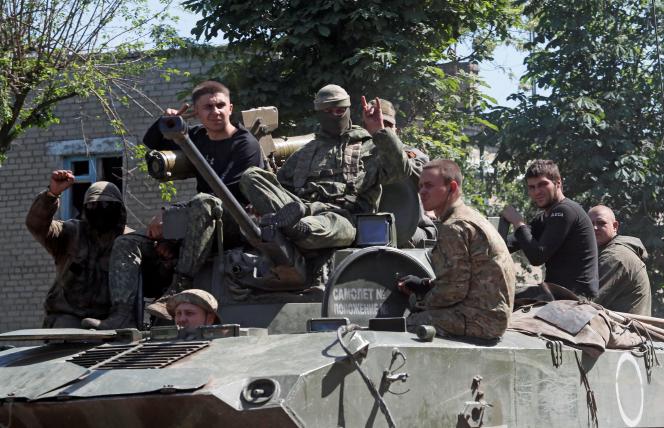 The Russian army tightened its grip on eastern Ukraine on Thursday, June 2, its priority objective in this war which has allowed it to get its hands on 20% of the country, according to kyiv. Sievierodonetsk is still under attack, the similarities with the siege of Mairoupol are disturbing, even if there have been, in recent hours, “some successes” Ukrainians to note in the city of the oblast of Luhansk.

Before the invasion, Russian or pro-Russian forces controlled 43,000 km2 there, since the annexation of Crimea and the capture of a third of Donbass in 2014. Since February 24, they have notably advanced in the East and in the South, along the Black and Azov seas, now controlling a strategic coastal corridor linking the Russian east with Crimea. Today, it is nearly 125,000 km2, or 20% of the country, which is in the hands of Moscow according to President Volodymyr Zelensky.

“The most difficult situation” concerns Luhansk, one of the two regions of Donbass, had underlined the commander-in-chief of the Ukrainian armed forces, Valeri Zaluzhny, quoted in an army press release published overnight from Wednesday to Thursday. After the failure of their lightning offensive to bring down the government in kyiv, the Russian forces are concentrating on the conquest of Donbass (east) where a war of attrition is now being played out, particularly around the strategic city of Sievierodonetsk. And Moscow’s steamroller tactic of slowly nibbling ground seems to be paying off.

Sievierodonetsk, the region’s administrative capital, is “80 percent occupied” by Russian forces and fighting is raging in the streets, Luhansk region governor Serhi Haidai said. Mr. Zelensky said Thursday evening in his daily message that the situation in the Donbass had not “changed significantly during the day”.

“We had some success in the battle for Sievierodonetsk. But it is still too early. This is the most difficult area right now,” he said, referring to a similar situation in the surrounding area, particularly in Lysytchansk and Bakhmout.

Russian pressure also remains significant on Donetsk, the other region of Donbass, in particular Sloviansk, some 80 km west of Severodonetsk. Residents of the region lack gas, water and electricity in particular, according to kyiv. A hundred people left Thursday Sloviansk, a city in eastern Ukraine now deprived of water and electricity, while the mayor of the city called on residents to evacuate. On Tuesday, a Russian strike left three dead and six injured in the city, and caused great damage, according to witnesses interviewed by Agence France-Presse.

In his address, Volodymyr Zelensky welcomed the return of 50 diplomatic establishments to the capital, previously moved to Lviv or elsewhere: “More and more embassies are resuming their full-fledged activities in Kyiv. This is very important, not only in practice, for the work of diplomats, but also symbolically. »

Before adding: “Each new embassy that returns to our capital testifies to the faith in our victory. The faith that Ukraine will be able to defend its statehood in this war, unleashed on our land by the Russian Federation. »

President Zelensky did not fail to recall his order of priority: “The main task remains to accumulate maximum support for Ukraine. First of all defensive, financial, and of course, political. It is very important that now, in a few weeks, we have a response from the European Union on Ukraine’s candidate status. We are looking forward to it. »

On the diplomatic level, the EU countries approved on Thursday a sixth package of sanctions against Moscow including an embargo, with exemptions, on the purchases of oil but renounced to blacklist the head of the Russian Orthodox Church , Patriarch Kirill, under pressure from Hungary.

In the United States, the Biden administration announced a new round of sanctions targeting oligarchs or members of Moscow’s “elite”, including the spokesperson for Russian diplomacy, Maria Zakharova. “I am grateful to President Biden, all of our American friends and the people of the United States for their support,” Mr. Zelensky noted Thursday evening. Ukraine is also awaiting deliveries of more powerful rocket launcher systems promised by Joe Biden, hoping that this will change the balance of power on the ground.

NATO Secretary General Jens Stoltenberg said Thursday after a meeting with President Biden in Washington that Western countries must prepare for “a war of attrition” over the “long term”.

The war in Ukraine “could end tomorrow, if Russia ended its aggression,” Stoltenberg said Wednesday at a press conference alongside US Foreign Minister Antony Blinken. But “we don’t see any signs in that direction at this point,” he added. Russia’s war in Ukraine will last “many more months,” Blinken said.