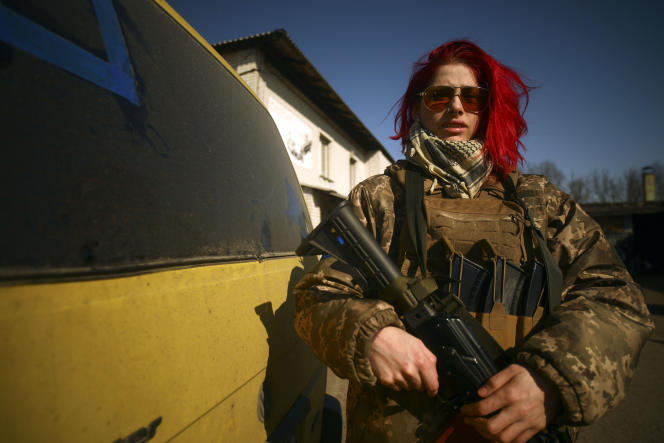 Since the beginning of the Russian invasion at the end of February, numerous reports have evoked the plight of Ukrainian women fleeing the horrors of war to find shelter, most often with their children, in neighboring countries. But how do those who have decided to stay despite the dangers live? Some have taken up arms, others are caring for the wounded, taking care of logistics or simply trying to bring some levity to children and help isolated people.

By having them testify, this documentary gives a feminine vision of war. To achieve this, Julien Boluen and Charles Comiti had the good idea to follow Véronique de Viguerie, photoreporter sent to Ukraine by Le Figaro Magazine. And, through her gaze, to try to understand how the Ukrainian women who remained in the country live. From the front line to morgues and mass graves, from kyiv to Kharkiv via Boucha and Irpine, Véronique de Viguerie goes as close as possible to suffering, inspires women’s confidence, makes them speak. According to the fates, it evokes the pain of losing a loved one, the trauma of rape, hope.

In the mud of the trenches

Iana, who studied biology, is in charge of communications in a battalion sent to the Donbass. In the mud of the trenches, under the bombs, in the front line, where the reporting team obtained, rare privilege, the authorization to follow her, the young woman launches: “The soldiers see me here, they are not afraid You’re welcome. It’s good for their morale…”

Assigned to the defense of kyiv, Maroussia, who left his advertising job to join the army in 2014, commands a unit. Her mother was evacuated, like her two daughters, refugees in Poland. In combat gear, machine gun in hand, she says, “Now that my kids are overseas, that I know they’re safe, it’s a lot easier for me to fight. »

Véronique de Viguerie captures the faces of women injured by shrapnel, metro cars transformed into makeshift dormitories where mothers try to reassure children. Through the testimonies of these women, the atrocity of war becomes palpable.

Marina, who comes to the aid of victims of war rapes, tells terrible things. And when the French photographer, who has been covering conflicts for more than twenty years, suddenly finds herself in front of a mass grave, emotion takes precedence over the usual coolness: “There, there is no more humanity. »

However, the documentary ends on a note of joy: Yaroslava, a dance teacher in Kyiv, gives lessons by Skype to smiling children. His meeting with Alexi turned into love at first sight. A few days later, they decide to get married. “War simplifies everything. She speeds things up, ”summarizes the lucky winner.