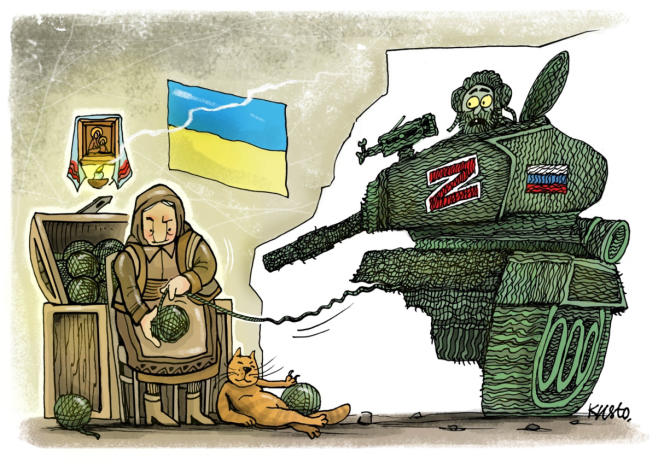 Trepanned Russian soldiers, eagerly watching Vladimir Putin spin candy floss in the shape of brains to fill their skulls. Children gathered in the sandbox, cautious in front of Russian soldiers about to drop a shell from the top of a slide. Most of the drawings published on two double pages by Charlie Hebdo, this Wednesday, May 25, speak for themselves. No speech bubbles, or so few, in these twenty works by Ukrainian artists that the satirical newspaper (25,000 weekly newsstand sales, around 37,000 subscribers) has chosen to highlight in a special issue. “A drawing without words, everyone can understand it, justifies Riss, the director of publication. The message being purely visual, it is more “universalizable”. However, Ukrainian cartoonists want to address the world. In a war situation, “excessive behavior becomes caricatural, and offers a boulevard for satirical drawings”, he analyzes.

“The only target is the aggressor”

Antonio Fischetti went to get them on the spot, during a report that seemed to start with a failure. “Initially, I had heard of comedians who did stand-up and sketches on the Internet, says the science journalist. But one of my interlocutors had seen a drawing by Riss inspired by the bombing of the Mariupol maternity ward [we see a row of women, legs in the air, Russian shells in their vaginas]. He found it outrageous, not humorous, even contemptuous – as it aimed to denounce the inaction of Westerners. He passed the message to all his friends in kyiv, and I had to find something else. »

Besides Kusto, cartoonist for the newspaper of the Ukrainian Parliament, it was in Odessa that Antonio Fischetti found the authors and works he was looking for; collected on the occasion of an exhibition launched on the initiative of a cartoonist club, these will be sold for the benefit of the Ukrainian army and the territorial defense of the port city. “I encountered a popular culture of resistance, important for morale,” continues the journalist. Before the war, traditional humor was rather benevolent. Today, it has become more ferocious, more trashy. The only target is the aggressor. The sufferings of the war, the daily human losses and the ongoing destruction prevent any dark humor vis-à-vis Volodymyr Zelensky and the Ukrainians themselves, he notes.

For Riss, the publication of these vignettes in the newspaper which, on January 7, 2015, saw 12 lives stolen and 11 ravaged in an Islamist terrorist attack, was obviously self-evident. “When one is confronted with the arbitrary, drawing is a means of protecting one’s territory of freedom. »