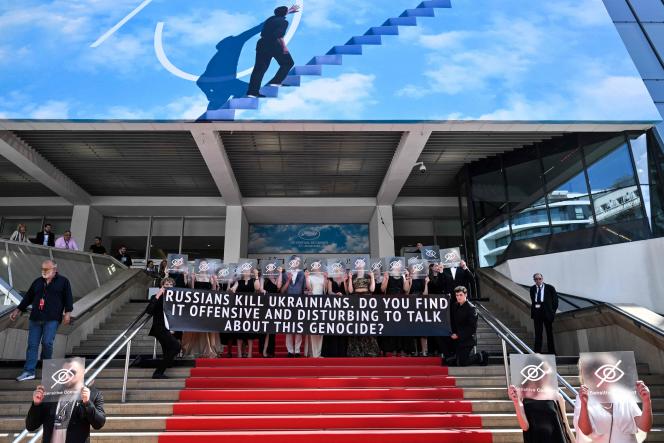 His apostrophe caused a stir: the Cannes Film Festival opened on Tuesday, May 17, with the unexpected appearance of Volodymyr Zelensky, by videoconference. “Will the cinema shut up or talk about it?” asked the Ukrainian president, about the Russian invasion ravaging his country. We need a new Chaplin, who proves to us that cinema is not silent. In fact, the specter of war has never ceased to haunt the Cannes festivities, disrupting the programming, feeding suspicions, interfering in conversations. This, with the notable exception of the closing ceremony, Saturday, May 28, during which no one mentioned the conflict – not even the winner of the Palme d’or, the Swedish Ruben Östlund, whose film Triangle of Sadness ( Unfiltered) stings the ultra-rich in general, and the Russian oligarchs in particular.

It turns out that the supreme award has been designed since 1998 by another admirer of Charlie Chaplin, the German jeweler Caroline Scheufele. On social networks as in interviews, the co-president of the Chopard brand celebrates, as soon as she can, the author of the Dictator (1940). To mark the 25th anniversary of the partnership between the Swiss jeweler and the Festival, she notably designed the City of Light brooch, in white gold and titanium paved with diamonds, a tribute to City Lights (1931). In return, the general delegate Thierry Frémaux warmly thanked his patron, in front of the 700 guests of the dinner of the 75th anniversary of the Festival, Tuesday, May 24.

Alas, during the demonstration, shadows were grafted onto this resplendent picture. Very audible on the Croisette, the Ukrainian delegation denounced the relations established in the recent past by Caroline Scheufele with relatives of Vladimir Putin. Extracted from the bowels of YouTube, a video shows her dancing alongside Ramzan Kadyrov, President of the Chechen Republic, in March 2017, in Grozny, on the occasion of the parade of his daughter, the stylist Ayshat Kadyrova. Ms. Scheufele was accompanied there, among others, by Tatiana Navka. This ex-figure skater is also the wife of Dmitri Peskov, the Kremlin’s spokesperson since 2012. The two women have repeatedly staged their friendship, including on the Cannes red carpet, which Tatiana Navka has walked on as Chopard muse from 2016 to 2021.

In Russia, where the jeweler has maintained its twenty-seven points of sale despite the war, its logo adorns several cultural events prized by the regime. This has been the case, since 2016, of the Moscow International Film Festival, chaired by filmmaker Nikita Mikhalkov, an unwavering supporter of power. This is also the case of the recital offered, on September 18, 2021, by soprano Anna Netrebko at the Kremlin Palace, during which Dmitry Peskov read the praises braided by Mr. Putin to the diva.

At Chopard, whose management refused to respond to Le Monde, discretion is in order. At the end of March, in tune with its main competitors, the jeweler announced the end of its collaboration with Alrosa, the diamond mining company controlled by the Kremlin, which before the war supplied nearly a third of the gross world production. In fact, at the evenings organized by Chopard on the roof of the Martinez hotel, during the Cannes Film Festival, we spoke less Russian than usual. Only a few models, settled for years outside of Russia, have been seen there, such as Natalia Vodianova, Irina Shayk or Natalia Kapchuk.

Accustomed to Chopard receptions, in Cannes as in Moscow, journalist Katya Mtsitouridze and influencer Victoria Bonya did not show up this year. However, their passage on the Croisette, which they abundantly documented on social networks, irritated most Ukrainians. The first is a star of the public television channel Channel One, the Kremlin’s main propaganda tool. The second, suspected of espionage in 2017 by the American border police, made herself known by wearing a swimsuit bearing the image of Vladimir Putin. And by broadcasting, on April 5, on Instagram, where she has 9 million subscribers, a video of her tearing a Chanel bag, in reaction to the withdrawal of the French brand from Russia. “How could they come up the stairs, repeatedly?” asks Alexandre Rodnianski. An influential producer of Russian arthouse cinema, this Ukrainian facilitated the intervention, at the start of the festival, of President Zelensky, of whom he is a close adviser. And to add: “Their presence on the red carpet has outraged me, while many Russian critics who have publicly denounced the war have not been accredited. »

As for the Festival, it is assured that neither Katya Mtsitouridze nor Victoria Bonya received an official badge – they therefore accessed the screenings thanks to tickets offered by partner brands. Of the 40,000 accreditations issued this year, which the French intelligence services have combed through, there are only half a dozen Russian journalists, belonging to opposition media, as well as the team of the only film Russian in the official selection, Tchaikovsky’s Wife, by Kirill Serebrennikov.

The Festival management would like to highlight its solidarity with Ukraine, as evidenced by five films programmed: Butterfly Vision (Un certain regard), Pamfir (Directors’ Fortnight) and The Natural History of Destruction (out of competition), made by Ukrainians Maksym Nakonechnyi, Dmytro Sukholytkyy-Sobchuk and Sergei Loznitsa, as well as Mariupolis 2 (out of competition), the posthumous documentary by Lithuanian Mantas Kvedaravicius, killed in April in Mariupol, and Est-Ouest (Cinéma de la plage), the film directed, in 1999, by Régis Wargnier, in Odessa. At the Film Market, round tables bringing together six young Ukrainian producers were organized on Saturday, May 21. Three days later, a DJ-set by their compatriot Nastasia electrified the Silencio, in the city center.

So many initiatives that are insufficient, in the eyes of the majority of Ukrainians. They point in particular to the respect reserved for Sergei Loznitsa, expelled in March from the Union of Ukrainian Filmmakers for having refused to call for a boycott of Russian artists. And protest, in the same way, against the press conference held by Kirill Serebrennikov, Thursday, May 19. Exiled to Berlin in April, after years of house arrest, the Russian filmmaker has always displayed his opposition to the war, including during the official screening of his film in Cannes.

In front of journalists, he defended his adaptation, in 2011, of a novel by Vladislav Surkov, who was for a long time a close adviser to Putin, as well as the funding he received from the oligarch Roman Abramovich. His words of support for the families of Russian soldiers, put on the same level as the Ukrainian victims, shocked many Ukrainians, who called for his expulsion from the Festival. “Kirill’s film is admirable, but perhaps it wasn’t the right time to show it… It should have waited until 2023”, whispers, with discretion, the Russian journalist Denis Kataev, who covered the Festival for the opposition channel Dojd.

As for Thierry Frémaux, he considers that he “held himself to the terms of the March press release”, by which the Festival had announced the exclusion of any official Russian delegation. During the demonstration, “no Russian shadow hovered anywhere, he insists in an SMS sent to Le Monde, Monday, May 30. Even radical Ukrainians – pleonasm – have recognized this. Their attitude is understandable, but very, very, very radical on ‘soft power’.” The general delegate refuses to comment on the friendships of Caroline Scheufele, as to quantify the patronage of Chopard. “We do not communicate the amounts of the partnerships, it is in the contract, which is renewed every six years. He regrets, moreover, that the author of these lines becomes “like the Americans and no longer talks about cinema at all”. Thursday, April 14, during the unveiling of the official selection, Thierry Frémaux had these words about the future Palme of Ruben Östlund, and his procession of oligarchs, models and influencers: “It’s a great general mockery of what we have become. »