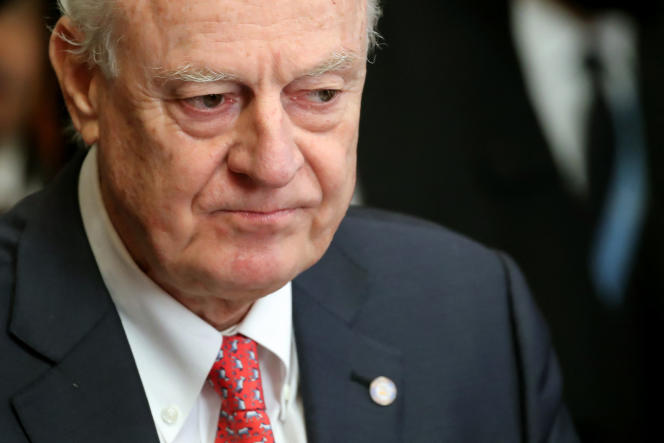 The United Nations envoy for Western Sahara, Staffan de Mistura, has been in Rabat since Monday July 4 to meet with Moroccan officials, but has given up on a planned visit to the disputed territory, the UN said.

“The secretary-general’s personal envoy for Western Sahara is in Rabat to meet with Moroccan officials,” UN spokesman Stéphane Dujarric said in New York. According to Moroccan media, Mr. de Mistura arrived in Morocco on Saturday. “He has decided not to visit Western Sahara during his trip, but hopes to do so on future visits to the region,” Dujarric added.

At a press conference on Friday, the day before Mr. Mistura left for Rabat, the UN spokesman said he intended to go – for the first time – to Western Sahara during his stay.

The question of Western Sahara, a former Spanish colony considered a “non-autonomous territory” by the UN, has for decades pitted Morocco against the Sahrawi separatists of the Polisario Front, supported by Algiers.

In a statement published in New York, the Polisario “deeply regretted” the cancellation of Mr. de Mistura’s visit, considering that Rabat “was thus trying to prevent him from directly witnessing the situation on the ground in the Sahrawi occupied territories”. He accused Morocco of “imposing preconditions on where he [the UN envoy] should go and who he should meet during his visit to the occupied Sahrawi territories”.

No explanation was given for the choice of the senior Italian-Swedish diplomat but, according to sources familiar with the matter, the Moroccan authorities had expressed reservations about such a trip during Mr. de Mistura’s previous visit in January. Moreover, he would not have been able to meet all the interlocutors he wanted in Western Sahara.

The visit of the UN envoy – the duration of which has not been specified – has not been officially announced in Rabat. “The personal envoy’s visits aim to advance the political process on Western Sahara,” Dujarric said on Monday.

On Friday, the UN spokesman said Mr. de Mistura expected to meet “all relevant actors in the region in the coming days”. “What he is looking for is how we can take the dialogue forward within the context of the relevant Security Council resolutions,” he said.

Rabat, which controls nearly 80% of this territory, proposes an autonomy plan under its sovereignty. The Polisario Front is calling for a self-determination referendum under the aegis of the UN, planned when a ceasefire was signed in 1991 but never materialized.

Appointed in November 2021, Staffan de Mistura made his first tour in the region in January, which took him to Rabat, Mauritania, Algiers and Tindouf in Algeria to meet the Polisario there.

Drama of Melilla: opening of the trial of a first group of migrants in Morocco

News Editor - July 5, 2022 0
The second round of the legislative elections delivered explosive results: no absolute majority for LRM, 89 elected for the RN, 142 for the Nupes...