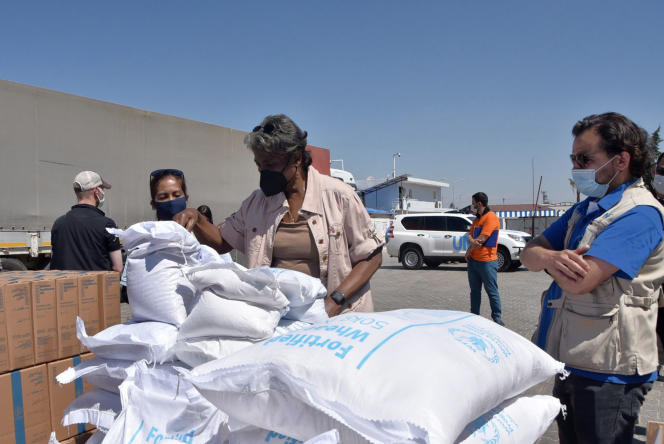 The Security Council of the United Nations (UN) adopted on Tuesday, July 12, a resolution providing for a six-month extension, until January 10, 2023, of the cross-border aid mechanism for Syria. The duration was imposed by Russia when all its partners wanted to extend the aid for another year.

The text was adopted by twelve votes out of fifteen, those of Russia, China and the ten non-permanent members of the Security Council. The United States, the United Kingdom and France abstained to mark their disagreement with a duration which they consider insufficient to plan the delivery of aid correctly.

“Russia forced everyone’s hand: either the device was closed or it was extended for six months” and “we couldn’t let people die”, had summarized, with Agence France-Presse, an ambassador during the agreement in principle reached Monday between the fifteen members of the Security Council on a new extension.

To be adopted, a text must obtain at least nine votes out of fifteen without a negative vote from one of the five permanent members of the Security Council (United States, France, United Kingdom, Russia, China).

Reopening of the border crossing between Syria and Turkey

The resolution provides for the resumption by the United Nations of the use of the Bab Al-Hawa crossing point, on the border between Syria and Turkey, which was no longer accessible to the United Nations since Sunday evening after the expiry of UN authorization. Created in 2014, the cross-border mechanism makes it possible to deliver humanitarian aid, without authorization from Damascus, to more than 2.4 million people in the region of Idlib (North-West) which remains under the control of jihadist groups and rebels.

The text adopted, led by Ireland and Norway, includes the possibility of a further extension of the system in January 2023 for six months, subject to the adoption of a new resolution, as proposed last week. Russia. Both Ireland and Norway said they were “relieved” on Tuesday that the cross-border mechanism could continue to operate. “It is outrageous that Russia has once again succeeded in blackmailing the members of the Council, this time by reducing the renewal period to six months so that the authorization expires in the middle of winter”, reacted in a communicated the NGO Human Rights Watch.

On Friday, Moscow had vetoed a one-year extension of the mechanism, in a quasi-automatic form of “six months-six months”, as the UN had decided a year ago. In July 2021, the extension was unanimously approved by the Security Council.

The resolution also requests, by December 10 at the latest, a special report to the UN Secretary-General on humanitarian needs and requires a briefing every two months on the application of the mechanism and of the one that allows the delivery of humanitarian aid from Damascus across the front lines.

Russia considers the cross-border mechanism to violate the sovereignty of Damascus and has long wanted to prioritize humanitarian aid across the front lines from the Syrian capital. The UN considers that it needs both devices so far to meet the needs of Syrians. The resolution also calls for increased humanitarian efforts in the areas of water, sanitation, health, education, electricity, as well as “rapid rehabilitation projects” in of shelters.

Westerners, who have so far refused to support any beginning of reconstruction in Syria as long as no political reform is undertaken, seem to have softened their position on this crucial subject for Moscow, which does not have the means to finance entire swaths of the Syrian economy, destroyed since the start of the war in 2011.