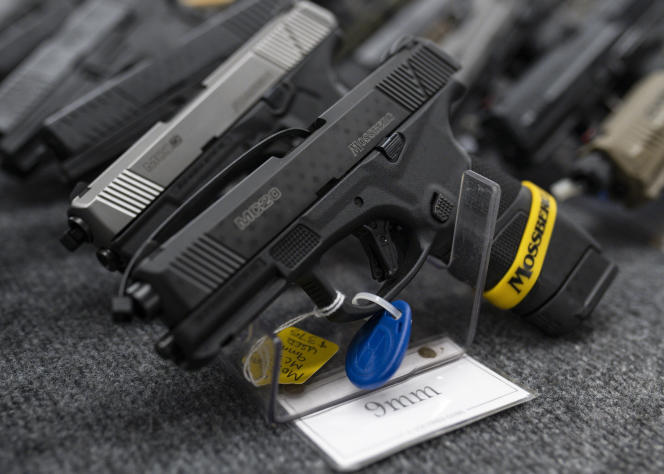 After the Senate on Thursday, the House of Representatives on Friday (June 24) approved a package of measures establishing new restrictions on weapons and devoting some $13 billion to mental health and school safety. The text should be promulgated in the wake of the president of the United States, the democrat Joe Biden.

The text was adopted – to applause – by 234 votes to 193: no Democrat opposed it and 14 elected Republicans approved it, overriding the instructions of their leader, Kevin McCarthy. On Thursday, it passed in the Senate by 65 votes — including 15 Republicans, including Republican Minority Leader Mitch McConnell — to 33.

“We passed the first landmark gun safety law in 30 years,” said Senate Majority Leader, Democrat Chuck Schumer, praising the Upper House for “doing something that many thought was impossible. a few more weeks.” Mr. McConnell had estimated that this law would make the United States safer “without making [the] country less free”. As soon as the text was unveiled, the National Rifle Association (NRA), the powerful arms lobby, expressed its opposition to the text, judging on the contrary that it could be used to “restrict the purchase of legal weapons”.

This is the first time since 1994 that a law strengthening the control of firearms, the possession and carrying of which are protected by the 2nd Amendment of the Constitution, has passed the multiple obstacles systematically opposed to this type of legislation by the NRA. and arms manufacturers.

The vote comes a day after the Supreme Court’s decision to allow Americans to leave their homes with a handgun, which marks a significant victory for gun advocates in a country deeply divided over the issue and regularly bereaved by deadly shootings.

In a deeply divided America, an agreement in Congress between elected Democrats and Republicans is rare, especially on this very divisive subject. The text is the result of bipartisan negotiations initiated in Congress following the shock caused in public opinion by the murder of ten African-Americans in a supermarket in Buffalo, New York, and nineteen children. and two teachers at a school in Uvalde, Texas.

The text highlights in particular the support for laws, State by State, which would allow the weapons they possess to be removed from the hands of people deemed dangerous. He also wants to strengthen criminal and psychological background checks for gun buyers between the ages of 18 and 21 and introduce better control of illegal gun sales and funding for mental health programs. But the proposed measures fall far short of what Mr. Biden wanted, such as banning assault rifles.

The attraction of Americans for firearms is undeniable. In the United States, arms manufacturers have produced more than 139 million for trade over the past twenty years (including 11.3 million for the year 2020), according to a report by the Department of Justice published on 17 may.

News Editor - June 24, 2022 0
After the Senate on Thursday, the House of Representatives on Friday (June 24) approved a package of measures establishing new restrictions on weapons and...

Lise Jousset, winemaker: “I like complex wines and fine cuisine, but...