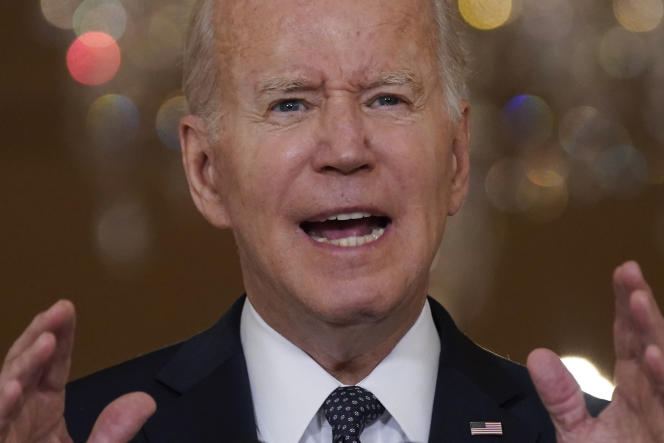 “Enough”: Joe Biden chanted this word as a plea throughout a solemn address delivered at the White House, Thursday, June 2, after a series of mass killings. The American president was addressing both public opinion and elected officials in Congress, calling on them to finally act on arms control. “In the name of God, how much more carnage are we willing to accept?” “, he launched. This new intervention on a subject close to his heart comes as a group of nine senators from both sides is working on minimum measures, which are not even certain to garner sufficient parliamentary support. Joe Biden lent his support to the “rational, common sense” initiatives, which are currently under consideration.

The first text, known as the “red flag”, would allow the temporary seizure, by court order, of weapons belonging to a person deemed unstable and dangerous. The other bill would strengthen due diligence background checks for any potential firearm buyer. “It’s not about taking away anyone’s rights,” Joe Biden told Republicans. These, in a very large majority, sanctify the second amendment of the Constitution and refuse any obstacle to their freedom to acquire and bear arms, regardless of their nature. To their attention, the American president also cited the need to strengthen the mental health sector, so as not to give the impression that it was only focused on weapons to be withdrawn from the market.

As with the right to abortion, threatened by an upcoming Supreme Court decision, the White House is making gun control a key issue in the political debate, ahead of the midterm elections in November. It seems to him likely to mobilize the Democratic base, in a general depressive context, caused in particular by an inflation unprecedented for forty years. “I believe a majority of you will act to make your outrage the central issue of your vote,” Joe Biden said, sensing a classic disappointment in Congress. A day of mobilization for arms control is planned for June 11 across the country, with a large rally in Washington.

This intervention by Joe Biden follows the death of 19 children and two teachers in an elementary school in Uvalde (Texas) and a racist massacre in Buffalo (State of New York), ten days earlier , in which ten people had perished. On Wednesday, in Tulsa, Oklahoma, a man killed four people in a hospital. The assassin was angry with his doctor, who would not have relieved his pain.

Delivered in the Cross Hall, a ceremonial hall of the White House decorated for the occasion with candles lined up around a red carpet, which reinforced the impression of a funeral wake, Joe Biden’s speech was imbued with sincere anger and an energy he often lacks. On Sunday, the president went with his wife Jill to Uvalde and spoke at length with the families of the devastated victims.

But his remarks also betrayed, between the lines, a political impotence. Sometimes, in the same sentence, the president expressed the gap between what is desirable and what is possible, in a Senate divided 50/50 between Democrats and Republicans. “We need to ban assault rifles and high capacity magazines, and if we can’t ban assault rifles, then we need to raise the age to acquire them from 18 to 21.” »

Assault rifles were banned between 1994 and 2004, leading to a significant drop in gun deaths, said the president, who at the time had led this fight in Congress, at the head of the Judiciary Committee. But this measure had expired after ten years, paving the way for a proliferation of these weapons of war. Similarly, Joe Biden has expressed the wish that the legal protection enjoyed by arms manufacturers when their products are used in deadly shootings be lifted. But it is very unlikely that the Republicans agree to weaken this industrial sector, which largely contributes to their electoral campaigns.