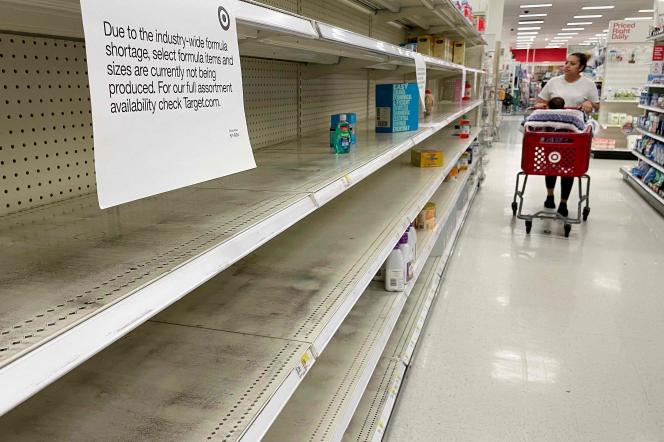 The case is turning into a headache for the American administration. President Joe Biden announced new measures on Wednesday May 18 to try to solve the shortage of baby milk in the United States.

The Department of Defense “will use its contracts with commercial cargo airlines, as it did during the early months of the Covid pandemic, to transport products from factories overseas” that meet the standards of American security, the White House said in a statement. This project, called Operation “Fly Formula”, will “accelerate the importation and distribution of baby milk”, providing support to “manufacturers who continue to increase their production”, added the executive.

Joe Biden also appealed to the “Defense Production Act”, a text inherited from the Cold War, in order to require producers of the ingredients necessary for the production of infant milk to deliver in priority the manufacturers of this essential commodity to the parents of young children.

“Asking companies to prioritize and allocate [resources] to the production of key baby milk ingredients will facilitate increased production and speed up supply chains,” the White House said.

Initially caused by problems in those same supply chains and a lack of labor due to the pandemic, the shortage of baby milk was made worse by the closure in February of a factory of the manufacturer Abbott in Michigan, after a product recall suspected of causing the deaths of two infants. The American drug agency (FDA) ended up clearing the milk, but it took until Monday for Abbott to reach an agreement with American justice in order to be able to restart production at this factory.

This very rare shortage of this essential product for many parents has turned into a political crisis for the Democratic president, much criticized by the Republican opposition. Joe Biden, anxious to underline his action in the face of this problem which still weighs down his popularity rating less than six months before the mid-term parliamentary elections, also sent a letter on Wednesday to his ministers of health and agriculture.

“I ask you to take all possible and appropriate steps to import more baby milk,” he wrote to them about the “Fly Formula” operation, noting in passing that his administration’s efforts to restart production after Michigan plant shutdown resulted in “more baby milk being produced in April than before the recall” of the offending batches.

Agriculture Minister Tom Vilsack responded immediately, saying in a statement that his office would “immediately” begin to implement presidential directives to stock stores with baby milk “as soon as possible”.

The food group Nestlé, which has two factories in the United States for the production of infant milk, had already announced on Tuesday its intention to send additional quantities of this product by plane to the United States, from Switzerland and the Netherlands. Low.

According to data provider Datasembly, the stock-out rate of infant formula had reached 43% by the end of last week in the United States.

For many families, formula milk is a necessity, especially in low-income homes where mothers, forced to return to work immediately after childbirth, cannot breastfeed. To their concern was added the rise in prices. Their dismay can be seen on social media, where posts shared hundreds of thousands of times call on parents to make their own baby milk, which paediatricians warn risks making infants sick.