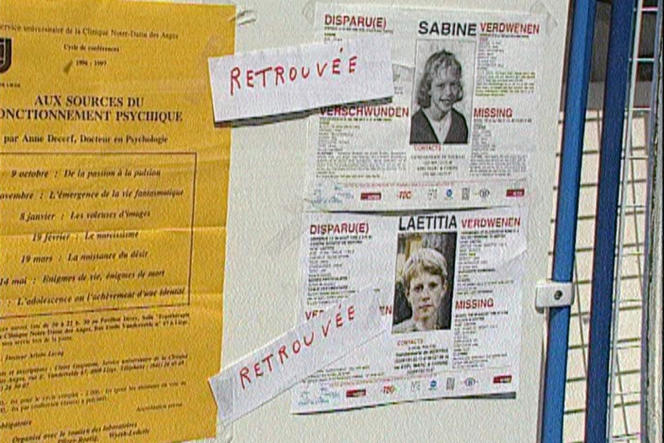 “It was not a TV series, but a true story. This sentence, pronounced by Jean-Denis Lejeune, the father of little Julie, on the last day of the trial of the killer Marc Dutroux, on June 17, 2004 in Arlon, has remained engraved in the memory of Belgians.

They remember other significant dates: June 24, 1995, when the 8.5-year-old girl disappeared, along with her friend Mélissa Russo, 9, in the Liège region; on August 13, 1996, when the recidivist pedophile was finally arrested and confessed to six kidnappings and four murders, or on October 20 of the same year, the day of the gigantic “white march” which mobilized more than 300,000 angry people in the streets of Brussels.

The population had, in fact, realized that this affair was not only a tragic news item but the illustration of a major failure of the police and justice, the drama of a totally negligent system, a incredible catalog of burrs. The Dutroux affair was indeed “unspeakable”, in accordance with the title that the RTBF gave to its long account of the ordeal of the parents of the six young victims of the criminal.

It took four episodes to retrace this extraordinary story which saw Julie and Mélissa disappear, then An Marchal and Eefje Lambrecks, kidnapped near Ostend on August 22, 1995 and whose bodies will be exhumed thirteen months later near Charleroi. Who saw free Sabine Dardenne and Lætitia Delhez on August 15, 1996 from the cache that the Machiavellian Dutroux had set up in a cellar in Marcinelle – where his first two victims died.

Unspeakable, these police officers who, according to the witnesses, laughed in the face of the first witnesses who came to talk to them about kidnappings. Unspeakable, the war in which the PJ and the gendarmerie, the investigators of Liège and Charleroi fought. Unspeakable, the attitude of magistrates entrenched behind the rules of their code to deny parents the most basic compassion.

Finally ? No sanction, except for a single policeman, rehabilitated a little later. All the others, who, in particular, did not take seriously the words of an informant who quickly cited Dutroux as a potential suspect, escaped prosecution.

The affair, which shook the famous Belgian “consensual democracy”, undoubtedly led to reforms of the justice system and the police, remedied the most serious shortcomings of these institutions and, above all, focused attention on the crimes sexual. On the other hand, it has not erased a fundamental mistrust and suspicion of citizens towards them. With, as a result, the rise of a populism which complicates a little more the management of this fractured kingdom.

“Unspeakable. The Dutroux Affair”, on Arte: the tragic news item that...

News Editor - June 8, 2022 0
“It was not a TV series, but a true story. This sentence, pronounced by Jean-Denis Lejeune, the father of little Julie, on the last...