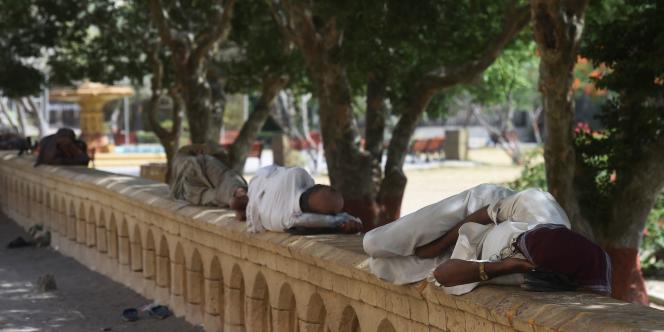 Pakistan was once again facing abnormally high temperatures on Friday, May 13, reaching 50°C in places, as authorities warned of the risk of water shortages and the threat to health.

Large swaths of the country have been experiencing a record heat wave since late April, which the United Nations World Meteorological Organization (WMO) has deemed to be “consistent” with climate change.

Temperatures soared to 49.5C in Jacobabad in the southern province of Sindh on Thursday, the Pakistan Meteorological Service (PMD) reported, saying it could stay that way until the end of the week. .

Nationally, temperatures are between 6 and 9 ° C “above normal” seasonal, said the PMD, the thermometer showing Friday 40 ° C in the capital, Islamabad, and the major cities of Karachi (south) , Lahore (east) and Peshawar (north-west).

“This year, we went straight from winter to summer,” said PMD Chief Forecaster Zaheer Ahmad Babar. Pakistan, he said, has been hit since 2015 by rising temperatures, particularly in the provinces of Sindh and Punjab (center). “The intensity, duration and frequency [of these heat waves] are increasing,” he told Agence France-Presse.

The flow of the Indus River has been reduced by 65 percent this year “due to lack of rain and snow”, according to the spokesman for the irrigation department in Punjab, Adnan Hassan. Taking its source in Tibet, the Indus crosses India then Pakistan before emerging in the Arabian Sea. Its basin provides 90% of Pakistan’s water supply.

The Pakistani press reported that sheep had died of sunstroke and dehydration in the Cholistan desert in Punjab, the country’s most populous province and breadbasket. “There is a real risk of food and crop shortages this year in the country, should this water shortage persist,” Hassan said.

The heat wave also hit neighboring India, with temperatures reaching 48.1°C on Thursday in the Barmer district of the northwestern province of Rajasthan.

Pakistan, which has a population of 220 million, says it is only responsible for 1% of global greenhouse gas emissions. However, it is in eighth position among the countries most threatened by extreme weather phenomena, according to a study by the NGO Germanwatch.