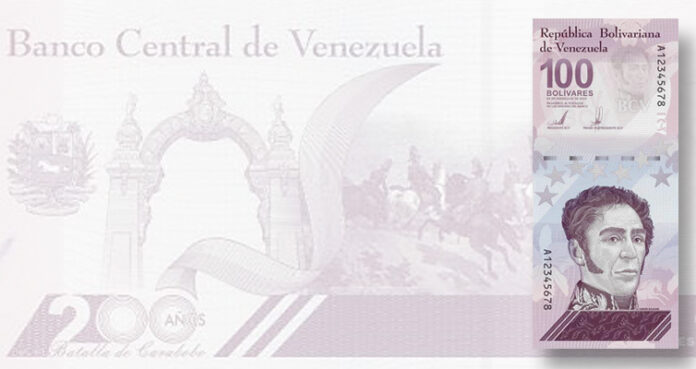 It’s being called the “digital bolivar.” This Oct. 1 action is another response to country’s hyperinflation. The issue of a 1-digitalbolivar coin will be accompanied with 5-, 10- and 20-digitalbolivar banknotes that will circulate in parallel with the current notes.

Six zeroes will be added to the denominations of the latter. This means that the face value of any old notes in circulation will be divided and remains legal tender.

Initial value of the 100-bolivar note is $25. This is not a move to demonetize, but an attempt to simplify the payment process, accounting records and computer systems.

All new currencies have the same portrait of Simon Bolivar as the old. These identical backs depict a scene that commemorates the 200th anniversary the Battle of Carabobo in which Bolivar’s forces defeated the Spaniards in 1821. This event led to Venezuela’s independence from Spain.

The digital bolivar will not be called a central bank digital cryptocurrency. It will use an SMS-based exchange system to transfer and transact between its users.

The petro cryptocurrency was introduced by Venezuela in 2018. It was tied to Venezuela’s oil wealth. Five other zeroes were removed from the currency.

The Central Bank of Venezuela attributed its problems to the United States, as is common practice. The statement said that the “change in monetary scale, supported by the deepening of the digital economy, in Venezuela, constitutes an important historical milestone as the country starts the path to economic recovery after the crisis caused by the brutal attack against our economy and national currencies, and the criminal application a financial and economic blockade.”

In fact, the majority of Venezuela’s economy is dependent on U.S. dollars.