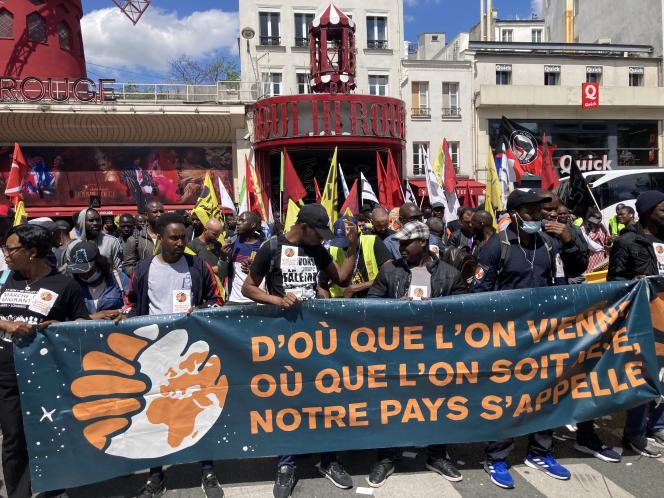 A little disappointed by the low presence of activists for climate and environmental causes, Lou Garcia, Victor Quilichini and Pierre Taïeb, activists from the Relais Jeunes, are nevertheless happy to be there, place Blanche, in the 9th arrondissement of Paris, this Saturday 11 June at the start of the “We don’t wait!” “.

Named in this way in particular with reference to the legislative elections, the first round of which is being held the next day, this demonstration, which takes place in many cities in France, was intended to be a point of convergence of the anti-racist, feminist struggles, for the undocumented, against the police violence, against the far right… and “for social and climate justice”.

The three young people walked, also cycled, for three and a half months, over some 3,000 kilometers and twenty stages in most of the major cities of France, to “replace the issues of democracy, social justice and the environment at the center of the national debate,” as proclaimed in the manifesto that led them to debate across the country.

It was with this march that they had decided to end their journey, by also bringing back the “witness”, a cylinder containing their manifesto “We are taking over”, at the Climate Academy, in the 4th arrondissement of Paris, from where they departed on February 20.

A student of political science in Paris, 25-year-old Montpellier resident Lou Garcia does not regret her long and tiring walk. “I have become radicalized in my commitments and I will have no trouble practicing civil disobedience, given the gravity of the situation and the inaction of governments. »

The electoral deadline of June 12, like the first measures of the government of Elisabeth Borne, does not reassure activists. “MPs are expected to uphold ecological and social justice values. They are the ones who decide the budget or the possibility of sanctioning companies that pollute, adds Lou. It is their role to plan and support people to implement the ecological transition. »

For Victor Quilichini, 21, a biology student and native of Kremlin-Bicêtre (Val-de-Marne), “small rearrangements at the government level [with a Prime Minister supported by a Secretary General for Ecological Planning] will hardly be enough . We are very far from what needs to be done.”

Throughout their journey, the ten young people who traveled the entire loop met activists of course, but also many farmers, with whom the activists often slept, citizens and a few elected officials. “It was not necessarily environmentalists or convinced alternatives, the meetings were rich, as in Roubaix with the inhabitants who had transformed an industrial wasteland into a garden to share, into a third place for the locals, the young people”, reminds Victor.

In the manifesto at the origin of their movement, these young people say they want to take over, “because for decades now, scientists, activists and philosophers have been shouting at us to warn us. The way we inhabit the planet is unsustainable, and we are only just beginning to understand that it is not even desirable.” The “policy of small steps” does not satisfy them, they say again, lamenting that political leaders do not listen to them.

Convinced that it will take more than climate marches to change things – and the weak mobilization of Saturday, June 11 confirms them – they highlight the need for the convergence of struggles. “There is an obvious and strong link between the mobilizations of undocumented migrants, refugees and the issue of climate and social justice”, insists Pierre Taïeb, 25, musician and at the origin, among others, of the Relais Jeunes .

To the sound of African drums and slogans of solidarity with undocumented migrants, surrounded by flags and banners of the Solidaires union, the NPA, or Europe Ecologie-Les Verts, Jean-Claude Amara also supports this necessary convergence. This emblematic figure of the fights for twenty years of Rights Ahead or Right to Housing (DAL) explains: “We have been fighting for years for the status of climate refugee to be applied to those who must leave their land. because of deforestation, drought…” The thirty or so activists from the Relais Jeunes present at the Paris demonstration can only acquiesce.