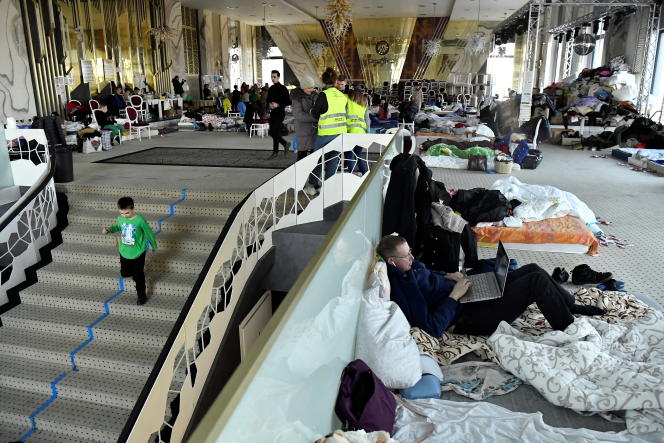 End of free transport, reductions in allowances, evacuation of refugees from hotels to transfer them to much less comfortable camps… After opening their doors wide, the countries of Central Europe, in the front line to receive Ukrainian refugees from the start of the war, began to revise their reception policy downwards. If these measures are often taken in the name of the fight against abuses or for obvious financial reasons while inflation is raging, they also announce the loss of breath of solidarity observed at the beginning of the conflict, in a context where the flow of arrivals have almost dried up and where some Ukrainians are even deciding to return home.

In Poland, the first host country with one and a half million Ukrainian refugees, the municipalities of the big cities (Warsaw, Krakow, Gdansk, Katowice, Lodz, etc.) recently suspended free transport for Ukrainians. Similar decisions have also been announced in many neighboring countries. In Slovakia, the local SNCF will only offer five days of free transport after detecting “abuses”, according to Jan Farkas, a senior official in the Slovak transport ministry. “Cross-border workers appeared several times and it is obvious that they did not enter Slovakia because of the refugee crisis. »

In Vienna, which has become a crossing point for refugees fleeing through Hungary or Slovakia, parking has also become chargeable for Ukrainian vehicles since June 1. A few weeks earlier, the head of the local branch of the Freedom Party of Austria (FPÖ, extreme right) had posted on Instagram photos of the many Ukrainian SUVs that have appeared in the Austrian capital in recent months, denouncing “the poor Ukrainians in which the mayor gives away parking fees, while every Viennese has to pay to park”.

If these measures on free transport may seem anecdotal, several countries have also announced that they want to drastically limit the allowances paid to Ukrainians. The second country in Europe to have received the most refugees after Poland, the Czech Republic has decided that only those who find accommodation and feed themselves will still be able to receive the monthly allowance of 5,000 crowns (about 200 euros) , set up at the beginning of the war.

In addition, Ukrainian exiles will only be able to benefit from free health insurance for 150 days. Then they will have to get to work, the government did not hide. During the debates in the Chamber of Deputies, which adopted this measure on May 31, elected officials even denounced the “social tourism” undertaken, according to them, by certain Ukrainians. In their sights, hundreds of Roma who have settled in tents at Prague station, claiming to have no other accommodation solution. The Czech authorities threatened to deport them, arguing that these Hungarian-speakers from Ukraine often had Hungarian passports or that they had already applied for asylum elsewhere in Europe.

“Their situation is objectively complicated, but they told them to leave just because they are Roma, without trying to analyze their situation in detail,” said Dalimil Petrilak, an activist specializing in helping migrants. For him, the political debate on Ukrainian refugees is drifting “in the wrong direction” in the Czech Republic. “Elections are coming up soon, and our politicians are obviously very careful not to appear as the ones who may have brought in problematic cases. »

In Poland, the government continues to offer refugees the same access to health and social assistance as its own citizens, including a family allowance of 500 zlotys (109 euros) per child, but, as of July 1, the aid of 40 zlotys per day (8.70 euros), intended for those who welcome refugees under their roof and feed them, will not be renewed, except for pregnant women, people with disabilities or those with several children to charge. “We are convinced that many people in Poland are in a position to become self-sufficient and adaptable,” said Pawel Szefernaker, Deputy Minister of the Interior and Government Plenipotentiary for Refugees.

Dominika Pszczolkowska, a researcher at the University of Warsaw’s Center for Migration Research, is not surprised that these restrictions are taking place, but she notes a major difficulty, when more than a million refugees are currently hosted by private individuals. : access to housing. Experts estimate that there were already two million housing shortages in Poland before the war. “About 25% to 30% of Ukrainian newcomers have already found legal employment, which is an incredibly high figure. But in large cities, the housing market is completely saturated. Some advocate modular housing for refugees. It is an option, but we would have to be very careful so that it does not lead to segregation. I would prefer to see increased investment in social housing, which Poland needed anyway. »

In the same vein, Bulgaria, the poorest country in the European Union, which has taken in 100,000 refugees since the beginning of the conflict, put an end, at the beginning of June, to the accommodation of Ukrainian refugees in the many hotels on the banks from the Black Sea; this measure cost the Bulgarian state 40 levas (20 euros) per day and per person. The government had indeed agreed, from the start of the war, with the hoteliers that they could reopen their establishments to tourists for the summer season. Within days, thousands of Ukrainians were ordered to leave their rooms and taken to one of the transit centers in the interior, usually welcoming migrants from Turkey. These offer much more Spartan conditions, with tents and containers.

Until now hosted in a hotel near Varna, Lubovia Gryvnyak, a 64-year-old retiree from kyiv, preferred to leave for Krakow, Poland, where her daughter was already a refugee. “We didn’t really know where we were going to be taken, they talked about a gymnasium and a shelter, and there were rumors that the conditions there were very bad,” she explains. Faced with the chaotic transfer conditions and poor reception conditions, tensions even erupted in the transit centers, and some Ukrainians finally preferred to return to their country “For three months, we provided unprecedented support in some of the best hotels in Bulgaria. Now we are entering a reality closer to what is expected for refugees, “said Bulgarian Prime Minister Kiril Petkov. More than 20,000 Ukrainians have been displaced in the country.