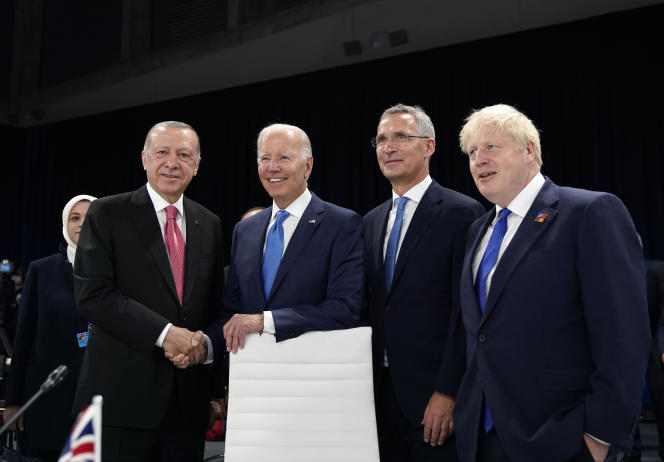 The United States will “strengthen its military positioning in Europe”, so that the North Atlantic Treaty Organization (NATO) can “respond to threats from all directions”, declared, Wednesday, June 29, to Madrid US President Joe Biden.

At a “historic” Military Alliance summit, he said, Joe Biden announced an enhanced US military presence and capabilities in Spain, Poland, Romania, the Baltic States, the United Kingdom UK, Germany and Italy.

“We are there” and “we are proving that NATO is more necessary than ever,” said the American president, alongside the organization’s secretary general, Jens Stoltenberg.

The NATO summit in Madrid demonstrates the Alliance’s aggressiveness towards Russia, Russian Deputy Foreign Minister Sergey Ryabkov said on Wednesday, calling the enlargement to Finland and Sweden as “deeply destabilizing”.

Joe Biden recalled in a statement that the United States had already deployed, this year, “20,000 additional military personnel in Europe to reinforce our lines in response to the aggressive initiatives of Russia”, which already brings to more than 100,000 the number of Americans stationed on the continent.

But he did not specify what the reinforcements announced on Wednesday would represent overall in terms of staff. The detail was only communicated by Washington for Germany (625 men or women) and Italy (65).

Joe Biden added that the United States would increase the number of its destroyers at the Rota naval base in Spain from 4 to 6 and establish “a permanent headquarters of the US 5th Corps” in Poland. It will be, the Pentagon said, the first permanent US presence on NATO’s “eastern flank”.

“We will maintain an additional brigade” composed of a total of 5,000 people, which will be based in Romania, also declared Joe Biden.

The American president has also announced “additional deployments in the Baltic States”, the Pentagon specifying that this would concern artillery, aviation, anti-aircraft defense as well as the presence of elite troops. On Russia’s doorstep, the United States also promises to “intensify exercises with our” Baltic allies, according to a Pentagon statement.

During a short speech, Joe Biden further clarified that Washington would “send two additional squadrons” of F-35 fighter jets to the United Kingdom, based at Lakenheath in the west of the country and “position capabilities additional air defenses” in Germany and Italy.

Towards a “NATO” of Europe

Russian President Vladimir Putin “wanted a ‘Finlandization’ of Europe”, that is to say, an evolution of the member countries of the Alliance towards the position of neutrality which has historically been that of the Nordic country, but he obtains, on the contrary, a “” NATO “of Europe”, welcomed Joe Biden.

Finland, historically non-aligned, and Sweden are indeed preparing to join NATO, after the lifting of Turkey’s veto on Tuesday evening, while the Alliance has displayed almost flawless unity from the start. of the war in Ukraine.

For its part, Norway announced on Wednesday the dispatch to Ukraine of three batteries of MLRS (Multiple Launch Rocket System) long-range rocket launchers. The announcement, which was made on the sidelines of the NATO summit, is being made in conjunction with the UK, according to Oslo. “This is an example of good cooperation between allies,” Norwegian Defense Minister Bjorn Arild Gram said.

Beyond Ukraine, NATO is expected to address for the first time in its new roadmap, called the “Strategic Concept”, the challenges posed by China to the “values” and “interests” of the Alliance.