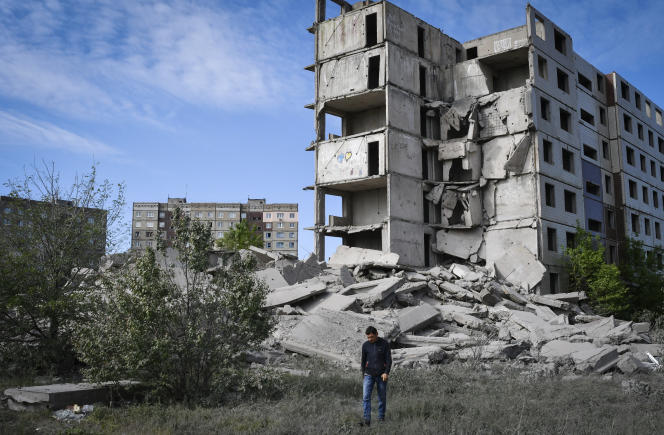 The Russian army continued to advance on Wednesday May 26 in eastern Ukraine. The fighting is focused on the city of Sivierodonetsk, in the Luhansk region where kyiv concedes an “extremely difficult” situation.

Nestled in the western part of the Luhansk region, the industrial city of Sievierodonetsk is almost besieged by the Russian army. The city is “simply being destroyed”, wrote Serhi Haïdaï, governor of the oblast, on Telegram. He accused the Russian army of bombarding the city using multiple rocket launchers, imprecise and devastating weapons. According to him, the bombs also target the Azot factory where civilians are taking refuge, in a situation reminiscent of the siege of Mariupol.

The governor estimates that the Luhansk region is already “more than 90%” controlled by the Russians. Oleksandr Striuk, head of the Sievierodonetsk military unit, told Kyiv Independent media that despite constant Russian attacks, the city remained accessible by the Ukrainian army.

Russia will allow residents of Zaporizhia and Kherson regions in southern Ukraine to apply for a Russian passport through “a simplified procedure”, according to a presidential decree issued on Wednesday. “This simplified system will allow everyone to clearly understand that Russia is not here for a long time, but for always”, reacted Kirill Stremoussov, an official of the Kherson region appointed by Moscow, quoted by the agency. Ria Novosti. “This will speed up our integration and our return home to Russia,” said Vladimir Rogov, a pro-Russian official from the part of the Zaporizhia region controlled by the Russian military.

The United States denounced an attempt to “subjugate” the population now under its control. The plan is “a Russian tactic to subjugate the Ukrainian people, to impose their will by force,” State Department spokesman Ned Price said in a press briefing, adding that the states States would “strongly reject” such a plan.

Ukraine badly needs mobile units capable of sending several rockets simultaneously, to have equal weapons in the face of Russia’s firepower, its Ukrainian foreign minister insisted on Wednesday in Davos. “The battle for Donbass is very much like the battles of World War II,” Dmytro Kuleba told reporters after a series of talks in Davos with government officials and business leaders. He explained that “some villages and towns no longer exist” in this region of Ukraine, which has come under heavy bombardment in recent days. “They were reduced to rubble by Russian artillery fire, by Russian multiple rocket launchers. »

Russia is better equipped than Ukraine for a number of heavy weapons, but Kuleba said the biggest imbalance is in launchers capable of firing multiple rockets simultaneously. kyiv has asked Washington for it, and it is “really the weapon that we badly need”, assured the minister. “Countries that are dragging their feet on supplying heavy weapons to Ukraine, they need to understand that in every day they spend deciding and weighing different arguments, people are being killed,” he said. .

kyiv thanked France for welcoming “Ukrainian war wounded in its hospitals, and in particular in army hospitals”, according to a press release published Wednesday evening by the French Ministry of the Armed Forces. During a telephone exchange with his new French counterpart Sébastien Lecornu, the Ukrainian Minister of Defense, Oleksiy Reznikov, “thanked France for the care it offers to Ukrainian war wounded”, according to this press release. The first two Ukrainian soldiers were received at the Percy military hospital, in the Paris region, the French minister’s office told Agence France-Presse.

News Editor - May 26, 2022 0
Minister of National Education for less than a week, historian Pap Ndiaye has been the target of attacks from the far right. Academic, French...

In Senegal, eleven babies die in a fire at the Tivaouane...