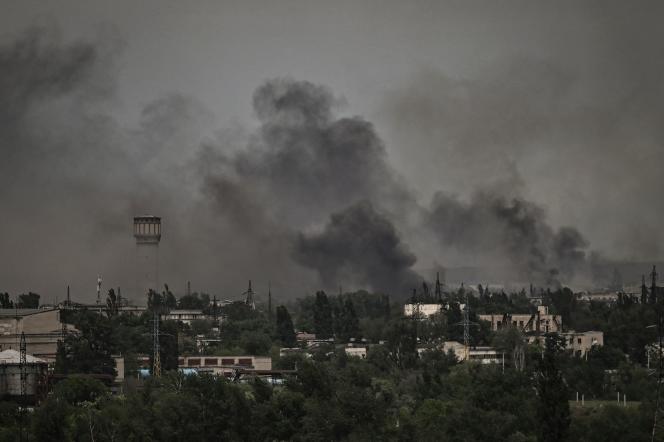 Russia is concentrating its forces in the battle for Sievierodonetsk, a key city in eastern Ukraine which had some 120,000 inhabitants before the war, and where the situation remains very confused. Moscow said on Saturday June 4 that Ukrainian military units were withdrawing from it, while the staff of the Ukrainian army and the mayor of this city, Olexander Striouk, reported in the evening of clashes with a view to completely retaking it.

The Russian troops “succeeded in entering the city and seizing a good part of it, dividing it in two. But our soldiers managed to redeploy, to build a line of defence. Currently everything is being done to restore full control” of Sievierodonetsk, Striouk said, referring to “street fighting”. “Units of the Ukrainian army, having suffered critical losses during the fighting for Sievierodonetsk (up to 90% in several units), are retreating to Lysychansk”, a nearby locality, for its part proclaimed the Russian ministry of defense.

Earlier in the day, the governor of the Luhansk region, Serhi Haidai, had admitted that “the situation in the whole region” was “extremely difficult”: “The fighting is currently concentrated in Sievierodonetsk because (…) the Russian army threw all its weight and reserves” into this battle. “Initial information indicates that they [the Russians] have managed to take control of most of the city. But our forces are pushing them back now.”

Attacks in the south

Parallel attacks occurred on Saturday on other fronts. In the southern region of Kherson, “residents have left the village of Trudolyubivka” and Russian forces “continue to shell occupied territories and positions of the Ukrainian army”, announced the Ukrainian presidency, warning of a crisis humanitarian aid in Russian-held areas. In addition, “warehouses were damaged” and there were two “casualties”, according to kyiv, when a Russian cruise missile hit an agricultural enterprise in the major port of Odessa, also in the south.

The Russian army, for its part, claimed to have destroyed “a deployment point for foreign mercenaries” near Dachnoe, in the Odessa region, and two Ukrainian command centers and six ammunition depots in the eastern regions of Donetsk and Luhansk. She also said she hit with missiles a Ukrainian gunnery training center near Stetskovka, in the northern region of Sumy, where “foreign instructors trained Ukrainian soldiers in the use of the M777 howitzer”.

Since the start of the invasion of Ukraine, the Russians have tripled the portion of Ukrainian territory they control: together with the Crimean peninsula and the occupied regions of Donbass and southern Ukraine, Russia now has the control over nearly 125,000 km2, or 20% of the area of ​​​​this country, according to President Zelensky.

‘Don’t humiliate Russia’ or ‘put her in her place’

Four foreign volunteer soldiers, including a Frenchman, were killed fighting Russian troops in Ukraine, the International Defense Legion of Ukraine, the official body for foreign volunteer fighters, also announced on Saturday. The Legion cited the names of a Dutchman, an Australian, a German and a Frenchman without specifying the date or the circumstances of their deaths.

Emmanuel Macron repeated on Saturday that “Russia should not be humiliated (…) so that the day the fighting stops, we can build a way out through diplomatic channels”. The head of Ukrainian diplomacy Dmytro Kouleba judged him that this position could only “humiliate France”. “We all better focus on getting Russia back in its place. It will bring peace and save lives,” he retorted to Mr. Macron, one of the few international leaders trying to maintain a dialogue with Russian President Vladimir Putin.

At the same time, the Chief of Staff of the American Forces, General Mark Milley, showed the determination of the United States to support Sweden and Finland before their accession to NATO, aboard the USS Kearsarge, the largest US warship ever to dock in Stockholm harbour. “It is important for us, the United States, as well as other NATO countries, to show our solidarity with Finland and Sweden with this exercise,” noted the officer, speaking of the annual naval maneuvers of Alliance in the Baltic Sea “Baltops 22”.