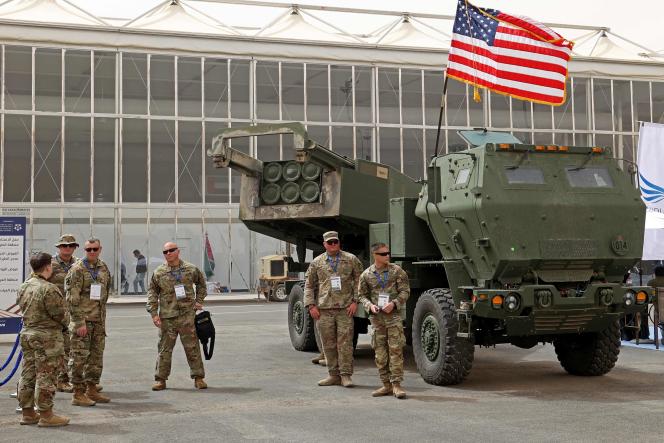 For the past few days, Ukraine has been insistently demanding MLRS (for Multiple Launch Rocket System, “multiple rocket launcher”) to be able to respond to Russian artillery and try to stop the advance of Moscow’s forces. Mykhailo Podoliak, adviser to the Ukrainian presidency, wrote this on Twitter on May 27.

The United States heard his call. “I have decided that we will provide the Ukrainians with more advanced rocket systems and munitions that will allow them to more accurately strike major battlefield targets in Ukraine,” President Joe Biden wrote in a published op-ed. in The New York Times, Tuesday, May 31.

Range up to 80 kilometers

Ukraine has a number of RM-70 multiple rocket launchers supplied by the Czech Republic, but these are “Cold War” systems, firing standard Soviet 122 millimeter rockets. The weapons promised by Joe Biden constitute a qualitative leap, even if kyiv does not receive the most advanced system from the American army.

The M142 Himars that the United States will send are a “light” version of the M270. The latter is a multiple rocket launcher mounted on the chassis of an armored tracked vehicle developed in the 1970s by the United States, the United Kingdom, France, Germany and Italy to counterbalance the numerical superiority of the Russian army in Europe. The M142 is a modernized, lighter version, mounted on an armored truck – therefore more mobile – of the MLRS. Developed in the 1990s, it entered service in the 2000s.

Both systems can fire different types of ammunition: from six (for the M142) to twelve (for the M270) GPS-guided 227mm rounds with a range of up to approximately 80 kilometers. They can also fire a ground-to-ground missile called ATACMS (Army Tactical Missile System) with a range of 300 km.

But in his text, Joe Biden insists that these weapons are only used on the Ukrainian battlefield. This is why Washington will not deliver ATACMS missiles capable of reaching Russia to kyiv. Indeed, since the beginning of the invasion, the United States has wanted to avoid carrying out actions that could be perceived as a provocation by Moscow, and therefore that the conflict does not get out of hand. “We are not going to send rocket systems to Ukraine that can hit inside Russia,” Joe Biden told reporters Monday morning.

Above all, the Missile Technology Control Regime (MTCR), a voluntary international arms control pact to which the United States and Ukraine are parties, prevents potential transfers of ATACMS missiles, recalls the site The War Zone.

A “myth” during the Gulf War

The M270 MLRS were first used during Operation Desert Storm, launched in 1991 by an international coalition under US command and commissioned by the UN to end Iraq’s occupation of Kuwait .

In a 1992 report by the Department of Defense to Congress, the Pentagon claimed that they had “a tremendous psychological impact on Iraqi soldiers.” Enemy soldiers were terrified of its destructive force, which they sometimes referred to as ‘rain of steel’. But the New York Times largely tempered this “myth”, saying that no Iraqi prisoner had mentioned “rain of steel”. “Steel Rain” is the nickname adopted by the artillery unit then deployed in Iraq.

Regardless, the “legend” lives on, as evidenced by a 2016 op-ed published in The Washington Post by Robert Scales. This retired American general boasted about Russian thermobaric weapons and regretted that previous American administrations had abandoned multiple rocket launchers, the “rain of steel”, in the name of “political correctness”.

In reality, the US military has never stopped using these weapons. During the Iraq war (2003-2011), they were used, reports a military blog. In Afghanistan, instead of M270s, it deploys Himars. Their presence was mentioned for the first time in 2007, during the failed attempt to eliminate a Libyan al-Qaeda fighter, then in 2010 in the Kandahar region, reports the New York Times. General Nick Carter, the British commander of the NATO coalition forces in southern Afghanistan, quoted by the American daily, explains that “they are extraordinarily precise; to the nearest metre”.

Temporarily removed from the battlefield

However, despite the precision boasted by the British general, in 2010, two rockets launched by Himars missed their target and killed ten civilians. These weapons are temporarily removed from the battlefield. In 2015, the Himars were again deployed in Iraq, this time against the Islamic State organization: their presence was mentioned during a Pentagon briefing.

The US military regularly “rotates” its artillery units with Himars to Europe, while Poland, which already has a few multiple rocket launchers, has placed an additional order, Mariusz Blaszczak, the Minister of the Polish defense on May 26. Romania has it too.

For Ukrainian gunners, training in the use of these rocket launchers would take about two weeks, military officials told CNN. They will have to take care of the replicas of the Russian artillerymen who also have multiple rocket launchers, the BM-21 Grad, BM-27 Uragan and 9A52-4 Tornado, in service in the Russian army, and whose use is documented by the independent site Oryx.