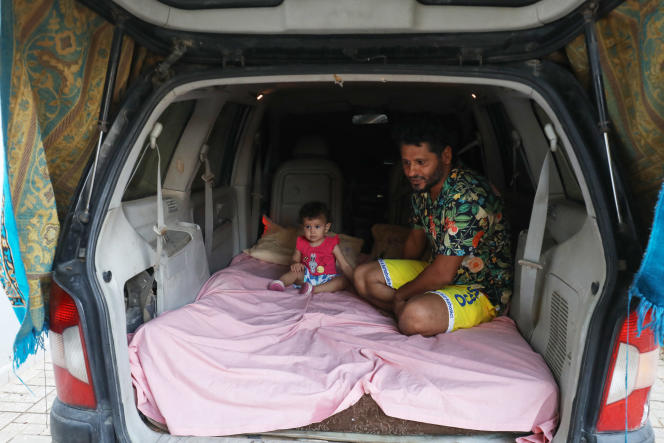 “Here’s my bedroom,” whispers Mahmoud Aguil, pointing to the trunk of his minivan: the 48-year-old Libyan owns a villa but sleeps in his car for air conditioning, because of the long power cuts that arouse anger and dismay in a country rich in gas and oil. “I removed the rear seats and turned the trunk into a sleeping area for the air conditioning. We sleep here when it’s hot,” says the father of two children living in Tripoli. The “room” fitted out in his large minivan is 3m2.

However, this employee of a demining organization lives in a single-storey villa of 250 m2 in the heart of the capital. Except that the electricity is cut for a dozen hours a day, even eighteen hours when the thermometer is around 40°C. Sleeping without air conditioning becomes an ordeal.

His wife and two daughters “sleep in the middle”, he on the edge of the bench: “I have back pain when I wake up. And even “when you have electricity, the current is very weak, barely enough to light lamps”, laments Mahmoud Aguil. A wall outside his house is covered in bullet holes, bearing the scars of the fighting that has raged in Libya over the past decade.

“We suffer from everything”

Incessant power cuts, inflation, insecurity… Libyans are bearing the brunt of the chaos that has hit their country since the fall of the regime of Muammar Gaddafi in 2011. Infrastructure is deficient, the economy on the ground, services failing. The vital energy sector, which, in Gaddafi’s time, made it possible to finance the welfare state, suffered from the war: squandered oil, damaged or unmaintained infrastructure, blockade…

The frustration is all the greater because the Libyans know they are few in number (barely 7 million) to share the dividends of Africa’s most abundant oil reserves. “We suffer from everything, from the health sector, from education. The roads are very bad, we have nothing,” laments Mahmoud Aguil. To remedy the cuts, some resort to sources of electricity other than the national grid, mainly generators that are often polluting, diesel-intensive and not always reliable, except for expensive models, which start at 5,000 euros.

“Thank you to the government,” quips Mahmoud Aguil. And he is not the only one to point out the negligence of the country’s elites. In early July, protests were organized across the country against deteriorating living conditions and political chaos. The resolution of untimely power cuts was at the top of the demands. In several cities, official buildings were burned or ransacked. In Tripoli, hooded protesters burned tires and closed roads. After three days, the movement ran out of steam.

“The state is absent”

In Tobruk (east), demonstrators forced the entrance to Parliament before setting it on fire. This institution is one of the symbols of the division of the country between a camp based in Cyrenaica (east), whose leader is Marshal Khalifa Haftar, and a government based in Tripoli, led by Prime Minister Abdelhamid Dbeibah. The Haftar camp supports a rival government formed in March with the support of parliament. His supporters have been blocking key oil installations since mid-April as a means of pressure to dislodge the executive from Tripoli. The blockade also causes a drop in the production of gas, which is nevertheless necessary for supplying the electricity network, prolonging the duration of the cuts a little more.

On Monday, the Tripoli government devoted its weekly meeting to the electricity sector, acknowledging that it had underestimated the problem. Authorities have announced the commissioning “this month” of three new power plants.

In the meantime, Ahmed Hejjaji is living an ordeal in Benghazi, some 1,000 km from the capital. “The authorities must guarantee us access to electricity,” he complains. Sitting next to her, her severely disabled 4-year-old child needs electricity to operate medical devices. Ahmed Hejjaji says he is helpless. On the eve of Eid al-Adha (Muslim festival of sacrifice), Saturday July 9, he experienced another ordeal, like many of his compatriots: “Left early in the morning to the bank to withdraw money, I stayed there until 3pm waiting in line. All this for what ? Because the state is absent. »